Falkland Islanders: ‘We do not want to be Argentine’ 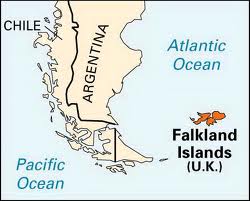 BUENOS AIRES, Argentina – Three decades since Britain went to war over the Falklands, its few hundred inhabitants of this island chain went to the polls for a final day Monday to say whether they wish to become part of Argentina.

Few here are expecting the English-speaking archipelago to switch sides.

“We’re not interested in being taken over,” says Peslyn Barkman, 25, a sixth-generation Falklander whose ancestors arrived more than a hundred years ago. “Argentina has nothing to do with our heritage.”

Argentina vigorously lays claim to the Falkland Islands, which are 300 miles of its southern coast and remain British overseas territory. The referendum on its future began Sunday and the Falkland’s 1,650 eligible voters continued to cast ballots Monday.

Buenos Aires has long claimed sovereignty over the islands, which it calls Las Malvinas. Under President Cristina Fernández de Kirchner, an all-out diplomatic onslaught is being waged to pressure the United Kingdom into relinquishing the islands.

Kirchner’s administration has taken its case to the United Nation’s decolonization committee and repeatedly implored Britain to respect resolutions dating to 1965 that call on the two countries to negotiate. Britain refuses, insisting the islanders have the right to self-determination.

In a similar referendum in 1986, 96% of islanders voted to remain under British control. Only three votes were cast in favor of Argentine sovereignty.

“I don’t know anybody who would vote ‘no,’ ” says islander Emily Hancox, a 23-year-old scientist.

The British first appeared here in the early 18th century and established a whaling port. For more than two centuries it was largely home to sheep farms and fishing fleets and known for high-quality wool.

In recent years the islands have been a popular port of call for tourists on cruise ships. And there is something else that is causing : oil. Energy firms have been conducting exploration in the area and Britain and Argentina have a pact on dividing the resources.

The islands, whose total population is around 2,800, have been the site of a sizable British army garrison since the end of the 1982 Falklands War, which Britain won after steaming into the South Atlantic with several naval vessels and aircraft carriers following an Argentinian invasion.

The military dictatorship in Argentina took the island in 1982 in an attempt to whip up nationalist pride amid a failing economy. The conflict cost the lives of nearly 1,000 men, including three Falklanders, and irreparably damaged relations between the islands and Buenos Aires.

“The barriers that are there are ones built by Argentina,” says Jan Cheek, a member of the eight-person Falklands Legislative Assembly.

The current, democratically elected regime has said the islanders’ culture would be respected were Argentina to gain sovereignty. But memories of the invasion are difficult to erase.

“I highly doubt that,” says Samantha Marsh, 30, an eighth-generation islander who grew up on a farm in West Falkland. “They didn’t do so in 1982.”

Upon invading, the dictatorship declared Spanish the official language, enforced a curfew and ordered islanders to drive on the right. Today, Buenos Aires refuses to recognize the Falklanders, insisting they are implanted British settlers that usurped an Argentine population in 1833. As such, it has branded the referendum illegal and says the dispute must be solved bilaterally.

“The Falklanders are not a third party,” says Miguel Savage, a war veteran from Santa Fe province. “They are British. They have no part in the discussion.”

The Falklanders say an Argentine military garrison was expelled, but that civilians elected to stay. “We spend a lot of time countering Argentina’s misinformation,” Cheek says.

The majority of islanders are of British descent, but there are also people of Scandinavian and Chilean ancestry, as well as short-term contract workers from New Zealand and Russia. Argentine officials say the United Kingdom is using the argument of self-determination to maintain a military base in the South Atlantic and secure the potential oil reserves being explored by British companies.

In Argentina, the majority of people firmly believe the Falklands belong to them – the fight for sovereignty is written into the country’s constitution. But many are also convinced Kirchner is using the islands as a populist tool.

“If the islanders want to remain British, that’s fine,” says Jorge Kasparian in his Buenos Aires shop that sells takeout food. “You can’t force them to be Argentine.”

While Argentina and Britain squabble, the Falklanders will have their say through the referendum.

“This is our chance to show what we want,” says Marsh, the eighth-generation islander. “And we do not want to be Argentine.”