Saudi DPM: Lebanese are welcome in the kingdom 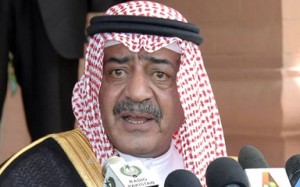 Prince Muqrin bin Abdulaziz al-Saud , the Saudi deputy Prime Minister announced on Sunday that Saudi Arabia is keen on the presence of Lebanese citizens on its territories and denied the rumors that the kingdom and private Saudi investors intend to withdraw deposits from Lebanon’s banks.

“KSA is keen on maintaining the best relations with Lebanon,” Prince Muqrem said after meeting with a delegation of heads of the country’s economic committees in Riyadh, adding that Lebanese presence on its territories is appreciated by everyone in the kingdom, on top of them is Saudi King Abdullah bin Abdulaziz al-Saud.

He stressed: “KSA will not take any measures against Lebanese citizens working in the kingdom”.

“We have no intention to withdraw deposits from Lebanese banks, whether by the cabinet or investors”.

The prince elaborated that Saudi Arabia’s policy towards Lebanon is stable and will not change: “The country’s stability must be preserved in order for it to continue playing a leading role in the region”.

Meanwhile, Head of Economic Committees Adnan Kassar criticized after the meeting the “cheap abuses by some Lebanese towards the kingdom and King Abdullah”, saying that this cannot be the answer to “KSA’s economic and financial support to Lebanon and to opening the door to thousands of Lebanese families”.

He added: “President Michel Suleiman and Lebanese political officials also share our opinion towards the kingdom”.

In February, posters mocking King Abdullah were erected in the areas of Jal el-Dib and Fanar in a move considered as a response to a caricature published in a Saudi newspaper on Maronite Patriarch Beshara al-Rahi.

The posters portrayed the Saudi King as the king of spades holding in his hand a sword stained with blood.

The Lebanese economic delegation also held talks with former Prime Minister Saad Hariri at his Riyadh residence and stressed on “the importance of disassociating Lebanon from Syria’s crisis”.

“The interests of Lebanon and its people must be safeguarded,” they noted, stressing that the “commonsense political speech must be adopted towards countries of the Gulf that continue to play a great role in supporting Lebanon’s development”.

Hariri praised the economic committees’ role in aiding Lebanon resist to situation the country has passed through: “The private sector continues to constitute the backbone of the Lebanese economic development”.

“The Lebanese banking system guarantees the free movement of capital and confidentiality, therefor, investors have the right to manage their money as they please,” he said.

The minister pointed out that Saudi deposits in Lebanese banks are secure and there are no financial, security or political fears that threaten their safety.

Safadi’s comments come after Kassar denied on Friday the rumors that investors have withdrawn $1 billion of their deposits from Lebanon.