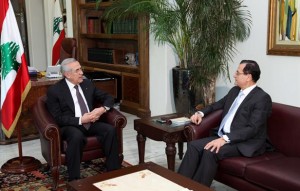 Lebanese President Michel Suleiman said that all Lebanese government officials and specially the Foreign Minister must clearly and without any ambiguities or confusion express the views that reflect the disassociation policy of the cabinet.

“The cabinet has adopted a policy of disassociation from the Syrian crisis… The stances and proposals made before international venues by politicians and ministers, especially the foreign minister, must reflect the disassociation policy without any confusion,” National News Agency quoted Suleiman as saying following his meeting with FM Adnan Mansour.

Suleiman stressed that if any government official has any problem in complying with this policy ,he or she should consult with the president who will in turn discuss with the premier,” Suleiman added.

This comes after Lebanon’s Premier Najib Mikati sent a strongly worded letter to the country’s Foreign Minister in response to the remarks he made about Syria at the Arab League foreign ministers meeting in Cairo.

But Mansour who was preparing to hand over the chairmanship of the Arab Ministerial Council to Egypt called for scrapping the decision to suspend the membership of Syria from the Arab League.

“I call for Syria’s membership of the Arab League to be lifted,” adding “Communication with Syria … is essential for a political solution.”

Mansour came under fire in Lebanon following the AL meeting:

Commenting on Mansour’s stance during the Arab League meeting , MP Akram Chehayeb a key member of Jumblatt’s National Struggle Front said in an interview with Kuwaiti Newspaper Assyasseh: “We usually do not pay much attention to what Mansour says , since events have shown that the Syrian Ambassador to Lebanon Ali Abdel Karim Ali is acting as the de facto Lebanese Foreign minister”.

“What kind of a dissociation policy is this and who authorized him to speak on behalf of the Syrian regime” .

Hariri asked: “Is he the Foreign minister of Lebanon or Syria ?”

Lebanese Prime Minister Mikati’s government is dominated by Hezbollah which has been supporting the Syrian regime in its crackdown against the uprising . Mikati according to observers cannot fire Mansour for disobedience because he is a member of the Amal party which is headed by Speaker Nabih Berri a key ally of Hezbollah. Besides, said one observer : “Mansour expressed the stance of the unelected supreme leader of Lebanon , Hezbollah chief Hassan Nasrallah as is evident from Raad’s statement “.

Hezbollah’s parliamentary bloc leader MP Mohammed Raad defended on Thursday the remarks made by Minister Mansour on Syria during the Arab League ministerial meeting in Cairo , saying that they “accurately reflect the Lebanese government’s policy of disassociation with regards to Syria”.

Mikati, along with president Michel Suleiman have sought to follow a policy of “dissociation” from the conflict in Lebanon’s dominant neighbor, but they are powerless since the Iranian backed Hezbollah militant group calls all the shots now in Lebanon , according to observers

One million refugees have fled Syria, piling pressure on its neighbors the United Nations refugee agency said on Wednesday. Lebanon, which is hosting the largest number of Syrian refugees despite being the smallest country in the region is struggling to support them.

On Thursday Mansour commented on the criticism against his statements and said that he was “ doing what is best” for Lebanon and all its people.