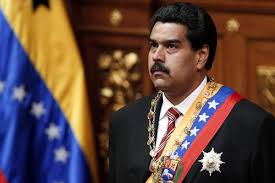 Venezuela’s new acting President Nicolas Maduro is pushing for a quick election, hoping to benefit from an emotional outpouring at the death of his charismatic mentor, Hugo Chavez, and step into his shoes.

Venezuela’s election commission could announce as early as Saturday a date for the election, which two recent polls have

He was sworn in as acting president in Congress on Friday and handed the red, yellow and blue presidential sash.

“I asked (the election authority) to comply with legal and constitutional obligations and immediately call elections,”

Maduro, 50, told Congress late on Friday as he cemented his position as heir-in-waiting.

The Supreme Court had earlier ruled that Maduro did not need to step down in order to campaign, but the move was denounced by opponents as a violation of the constitution and a “fraud.”

As Maduro spoke in Congress, residents of some wealthy neighborhoods of Caracas banged pots and pans in a traditional

Maduro named Chavez’s son-in-law Jorge Arreaza as his vice president, and then returned to a military base where more than 2 million people have filed past Chavez’s remains to pay their last respects, and took his oath again in front of the casket.

Chavez was a hero to millions of mostly poor supporters for using Venezuela’s oil wealth to finance heavy social spending during his 14-year rule but he was seen as a dictator by his opponents. He died on Tuesday at age 58 after a two-year battle with cancer.

Like Communist leaders Lenin, Stalin and Mao, Chavez’s remains are to be embalmed and put on display “for eternity”. 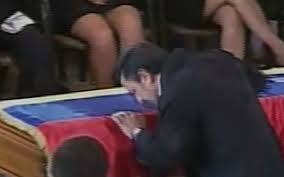 It is likely to be a particularly bitter election campaign in the OPEC nation, which boasts the world’s largest oil

cancer, and is furious that Maduro was allowed to take on the job of caretaker president while he campaigns for the job.

“This transgression is unprecedented in the history of the republic,” opposition lawmaker Maria Corina Machado said on

“Today, on a day of mourning … the Supreme Court issued a political sentence, a fraud,” said opposition leader Henrique Capriles, 40, the centrist governor of Miranda state who lost to Chavez in October’s election and is expected to face off against Maduro.

“We are not prepared to tolerate abuses of power,” he added.

“To become president, the people have to elect you. … No one elected Nicolas president.”

The constitution stipulates that an election must be called within 30 days, but some politicians said the electoral

authorities may not be ready. Before Maduro’s call for an immediate vote, there had been talk of a possible delay.