The Illegitimate Will Fall 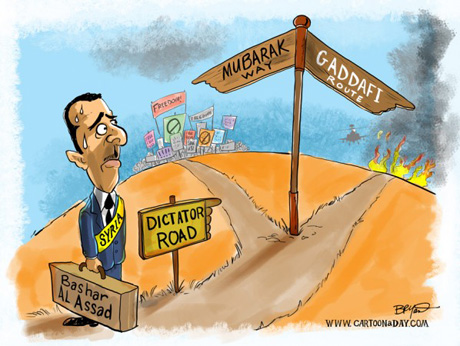 Once upon a time there used to be a pleasant village whose people led a simple but yet productive lifestyles. One day a high ranking member of the army decided that this laid back life style was not good for the villagers and so he coordinated a takeover of the government of the village.

That was over forty years ago. About twelve years ago the officer who consolidated power in his own hands , surrounded himself with co religionists and ruled as a dictator who can never be crossed died. He was very clever though, and so he made sure that a son of his, an eye doctor, would take over from him when he dies.

The dictator who would not allow any opposition or dissenters died but made sure that his successor will be his totally inexperienced eye doctor son. The Ophthalmologist continued the rule of fear started by his father but yet made many promises along the way that he would encourage social equality. Unfortunately he did not put into practice any of the informed reforms that he had promised. Actually, as opportunities presented themselves the son God became ever more convinced that his subjects are not smart enough to rule themselves. He even preached that his one party rule is efficient and that his entourage is not capable of making any wrong calls. The party was infallible and all who would oppose it are traitors and imperialist pigs.

Life under the son-God became more difficult than what it was under his father and he thought that the people in his state are enamoured of him. One day though, a number of kids were playing an innocent ball game when they decided that it was about time that they show the authoritarian authorities that they have had enough and that they will not take it any longer.

Such acts of defiance were deemed to be extremely dangerous by the absolute son God king. He ordered his subordinates to make a lesson of everyone who dared question his authority. All the kids were to be arrested, beaten and then set free.

But the unforeseen took place. Thousands upon thousands from across the country joined the young and decided that the popular saying “Live free or die” was an idea whose time has come. They organized demonstrations and adopted acts of civil defiance in the hope that such peaceful moves will demonstrate that illegitimacy must go.

But as bad luck would have it, the son God decided that he will teach all those that dared demand what was theirs in the first place,a lesson. He ordered his henchman to go out and spread fear among these youthful souls through beatings, arrests, mistreatments and the random acts of violence. When these tactics did not prove to be sufficient to dampen the spirits of the freedom fighters the son-God ordered his tanks, fighter jets, attack helicopters and cluster bombs to be used indiscriminately. They were. The result has been close to 100,000 deaths, a million wounded and the leveling of one city quarter after another over its civilian inhabitants. None of this would frighten the courageous youth anymore. They had vowed that they will not stop short of victory.