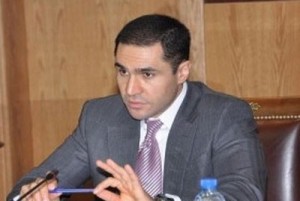 Syria’s industry body has filed a case in a European court against the Turkish government for allegedly sponsoring terrorism and looting factories in strife-torn Syria, a report said on Monday.

“This is a case aimed at asserting our rights, regardless of our political opinion,” Al-Watan quoted the chamber’s president Fares Shehabi as saying. He said that several Syrian unions have signed on to the complaint.

“We have the necessary documents… to prove Erdogan’s obvious involvement in sponsoring acts of banditry and terrorism.”

He said the chamber accuses Erdogan of contributing to the “transfer of factory (machinery from Aleppo province in northern Syria) to Turkey,” and of “supporting armed gangs who are committing crimes against the national economy”.

In January, Syria accused Turkey of plundering factories in Aleppo, once the country’s commercial hub, and called on the United Nations to help put a stop to what Damascus described as “an illegal act of aggression that amounts to piracy”.

“Some 1,000 factories in the city of Aleppo have been plundered, and their stolen goods transferred to Turkey with the full knowledge and facilitation of the Turkish government,” the Syrian foreign ministry then said in letters sent to the UN.

Shehabi said the legal complaint is aimed at compelling Ankara to “change its policy towards Syria” and to bring back the stolen goods.

Once allied to President Bashar al-Assad’s regime, Ankara broke ties with Damascus to support the revolt that erupted in March 2011.

Turkey is hosting some 200,000 Syrian refugees who fled the fighting in their country.

“At least a dozen Syrian investors have applied for industrial plant licenses in Lebanon with millions of dollars to be invested” in the next 3 years, Vreij Sabounjian was quoted as saying , adding that applications have been received over the past year.

The minister said the planned factories would cover industries such as metal works, furniture, machinery and beverages. The plants would be mainly located in the Bekaa Valley region and areas surrounding Beirut.

Other Syrian investors preferred to put their money in Lebanese-owned factories or are mulling joint ventures with Lebanese businessmen, according to Sabounjian.

Sabounjian, however, noted that he had received complaints that several Syrian investors, particularly those who had come to operate smaller, labor-intensive plants, had failed to apply for permits or register staff at the National Social Security Fund.

The Syrian market, which for decades depended to a large extent on local industry, has been facing shortages after most of Aleppo’s manufacturing plants were devastated or looted in the ongoing military conflict.

But the destruction of plants in Syria has opened export opportunities for Lebanese manufacturers.

“Lebanon is the closest country to Syria. A lot of industries in Lebanon are able to sell in Syria and are benefiting a lot,” Sabounjian said.

“Some industries – including cement, garments and woodworks – are even selling to countries where Syria used to export to.”

Several Syrian-Armenians are also considering moving some of their industries to Armenia the head of the Armenian Chamber of Commerce Arayik Vardanyan told Armenian News last June .