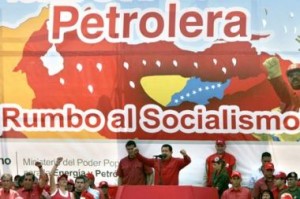 Mourners lined up across the country on Thursday as Cuba paid homage to the late Venezuelan President Hugo Chavez, amid concerns that his generous policies would not survive him.

In many cities and towns, people filed through government-arranged memorials to pay tribute to the man who poured oil and money into the island nation to help revive its economy after a near-collapse in the 1990s.

In Havana, lines stretched around the full sweep of Revolution Square, where former Cuban leader Fidel Castro used to speak to rallies of a million people, as they went to the memorial beneath a giant statue of Cuban hero Jose Marti.

Such honors were previously reserved only for commanders in Cuba’s 1959 revolution, including Ernesto “Che” Guevara, the Argentine who helped lead the rebellion and years after his death remains an inspirational figure for leftists globally.

Whether Chavez, who died of cancer on Tuesday at the age of 58, will achieve the same posthumous status remains to be seen, but for Cubans his importance could not be understated.

“He gave us help when we needed it most. He gave us hope,” said grim-faced student Tomas Silvio, 24, as he left the Marti monument.

A tearful woman behind him carried a large photo of Chavez, inscribed with the words “Heart of my life.”

Chavez came to Cuba’s rescue after the communist island’s economy plummeted into what is known here as the “Special Period” after the 1991 fall of the Soviet Union, its top ally and benefactor for 30 years.

Under his rule, Venezuela had been shipping Cuba 115,000 barrels of oil a day in exchange for the services of 44,000 Cubans, most of them medical personnel.

He and President Raul Castro, who replaced older brother Fidel five years ago, worked to integrate the two countries’ economies with some 30 joint ventures and agreements for many more that have yet to take wing.

According to official Cuban figures, Cuba-Venezuela trade in 2011 was $8.3 billion, out of the island’s total of $20 billion.

While life is still not easy for most Cubans, who earn an average of $19 a month but receive various social benefits, it is better than the deprivation and prolonged power blackouts they suffered during the Special Period.

Predictably, the prospect of life without Chavez has raised worries of a return to those times.

Most Cubans are pulling for Chavez’ preferred successor, Vice President Nicolas Maduro, to win an upcoming election for the presidency, under the assumption that he will continue the late leader’s policies.

His expected opponent, the more conservative Henrique Capriles, has said if elected, Venezuela’s oil largesse, which also goes to a number of countries besides Cuba, will end.

But there are doubts about whether Maduro has the political force to keep the Chavistas unified and in power.

“I don’t think Maduro has the strength that Chavez had. Will he be able to survive a coup? I don’t think so,” said housewife Deisy Gonzaga, 34, as she waited for a bus amid the crumbling buildings of Central Havana.

Cuban insecurity is fanned by the fact that despite the efforts of Chavez, life on the Caribbean island is still Spartan, with little money, few extras and limited choices.

A few blocks from the long line of mourners in Revolution Square, Cubans queued up around the wire fence of a neighborhood agricultural market because word had spread that for the first time in weeks, potatoes were available.

A security guard at the gate kept order by allowing customers in a few at a time, but there were still shouts of discontent from the anxious and growing crowd.

“We haven’t had potatoes for some time. I guess the harvest has started,” said retired engineer Anibal Fontana, 78, as he stood with an empty sack in hand, waiting his turn.

“Cubans are used to this, lines for everything,” he said.

Not all Cubans are worried about Venezuela’s political future. Lazaro Rodriguez, a building manager in the Vedado district, said he expects Maduro to win and continue the policies of Chavez.

Photo: The end of Hugo Chavez could mean big changes for the struggling state-owned Venezuelan oil industry, which drives its nation’s economy, provides the money for Chavez’s export of socialism, and has helped prop up Cuba through subsidies of hugely discounted oil.