Body of Venezuela’s Chavez to Be Put on Permanent Display 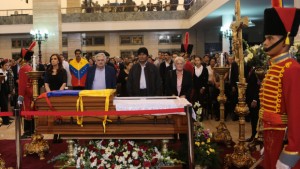 Vladimir Lenin, Mao Zedong, Ho Chi Minh, and now Hugo Chavez. The late leader’s supporters have put him on a pedestal long provided for the world’s great leftist revolutionaries by saying they will embalm his body for perpetual display.

Vice President Nicolas Maduro, Venezuela’s acting head of state, said Thursday that Chavez’s body would be forever displayed inside a glass tomb at a military museum not far from the presidential palace from which the socialist firebrand ruled for 14 years.

“We have decided to prepare the body of our ‘Comandante President,’ to embalm it so that it remains open for all time for the people. Just like Ho Chi Minh. Just like Lenin. Just like Mao Zedong,” Maduro said.

Other socialist or communist leaders given similar treatments after dying are Russian dictator Josef Stalin, though his body was later removed, and North Korea’s father-and-son leaders Kim Il Sung and Kim Jong Il. But it was the famous display of Soviet founder Lenin in Moscow’s Red Square in 1924 that inspired the custom among leftist leaders.

Maduro said Chavez’s body would be held in a “crystal urn” at the Museum of the Revolution, a stone’s throw from Miraflores presidential palace, but that first the body would lie in state for “at least” seven days at the museum.

The announcement followed two emotional days following the leaders’ death in which Chavez’s supporters compared him to Jesus Christ, and accused his national and international critics of subversion.

But not everyone shared in the adoration of Chavez in death.

“Seriously? It’s not a joke?” asked street food vendor Juan Ferreira, 51, on hearing that the late president’s body would be put on permanent display. “Well, they can do what they like with Chavez’s body. What is important is that they leave us in peace and give us the tranquility to work, that they stop making all us Venezuelans fight.”

A state funeral was planned for Friday and would be attended by more than 30 heads of government, including Cuban President Raul Castro and Iranian leader Mahmoud Ahmadinejad. Congressman Gregory Meeks, a New York Democrat, and former Rep. William Delahunt, a Democrat from Massachusetts, will represent the United States, which Chavez often portrayed as a great global evil even as he sent the country billions of dollars in oil each year.

A sea of sobbing humanity jammed Venezuela’s main military academy Thursday to see Chavez’s body, some waiting 10 hours under the twinkling stars and the searing Caribbean sun to file past his coffin. On Thursday night, Castro and Uruguayan President Jose Mujica visited the viewing site.

Even as his supporters attempted to immortalize the dead president, a country exhausted from round-the-clock mourning began to look toward the future. Some worried openly whether the nation’s anointed leaders are up to the task of filling his shoes, and others said they were anxious for news on when elections will be held. The constitution mandates they be called within 30 days, but the government has yet to address the matter.

“People are beginning to get back to their lives. One must keep working,” said 40-year-old Caracas resident Laura Guerra, a Chavez supporter who said she was not yet sold on Maduro, the acting head of state and designated ruling party candidate. “I don’t think he will be the same. I don’t think he has the same strength that the ‘comandante’ had.”

At the military academy, Chavez lay in a glass-covered coffin wearing the olive-green military uniform and red beret of his paratrooper days and looking gaunt and pale, his lips pressed together.

Government leaders were largely incommunicado Wednesday as they marched in a seven-hour procession that carried Chavez’s body from a military hospital to the academy. But they finally emerged before the cameras Thursday.

Asked when an election would be held, Foreign Minister Elias Jaua said only that the constitution would be followed. National Assembly chief Diosdado Cabello said later that Maduro would be sworn in as acting president of Venezuela on Friday after Chavez’s state funeral.

While Maduro is the clear favorite over likely opposition candidate Henrique Capriles, the nation is polarized between Chavez supporters and critics who hold him responsible for soaring inflation, a growing national debt and a jump in violent crime.

Ana Teresa Sifontes, a 71-year-old housewife and opposition sympathizer, said Chavez did some good things for the nation’s poor. But she said he had mismanaged the economy and showed more interest in regional grandstanding than governing.

“Why do we have to pay for Cuba?” she asked, referring to the billions in Venezuelan oil Chavez sent to Havana each year in return for Cuban doctors and other experts. “Why do we need them here?”