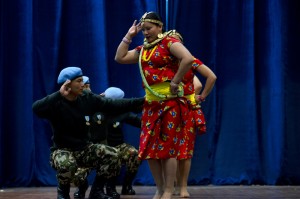 The United Nations began celebrating Women’s Day on 8 March during International Women’s Year in 1975. Two years later, in December 1977, the General Assembly adopted a resolution proclaiming a United Nations Day for Women’s Rights and International Peace to be observed on any day of the year by Member States, in accordance with their historical and national traditions.

The photo exhibition featured a selection of 20 large-scale prints of female peacekeepers from the 2013 “Women of UNIFIL” calendar.

In addition to the photo exhibit, guests were treated to several traditional dances performed by UNIFIL contingents and were able to enjoy a wide display of Lebanese food and handicrafts presented by local women’s cooperatives.

Stay tuned for a full MultiMedia presentation of this event on Monday 11 March 2013.

Lebanon was once considered a pioneer of women’s rights after the country achieved important milestones to establish gender equality, according to a Friday report by the Daily Star:

These included granting political rights to women in 1953, giving married women the right to choose their citizenship in 1960, allowing women to be elected in local councils in 1963, establishing equal social security benefits in 1984 and driving back honor crimes in 2011.

However, Lebanon certainly has a long road ahead to becoming the regional champion of equal rights, as women have not been granted fully equal citizenship, despite the existence of constitutional guarantees and U.N. treaties pertaining to human rights that bear Lebanon’s signature.

The (National Commission for Lebanese Women) NCLW secured other small victories in 2012, including allowing employed females to grant social security coverage to their unemployed male spouses, winning mothers the right to claim family abatement allowance for their children and protecting female heirs’ exemption rights from duty fees under the inheritance law.

However, any sign of progress with respect to the so-called “big laws” over the past year has come to an effective stalemate.

The nationality law still prohibits Lebanese women married to foreigners from granting their nationality to their husband and children. The inherent discrimination in the law stems from the country’s reliance on religious personal status laws that women’s rights groups have argued place women at a disadvantage.

On This occasion President Michel Suleiman called Friday on Lebanese women to have a greater role in the country’s public domain , according to LBC

“Women are encouraged to participate in different public fields to fulfill their message and role in society,” Suleiman stressed.

The president highlighted the role of the Lebanese government in paving the way for Lebanese women to acquire their full rights, according to the LBC report.