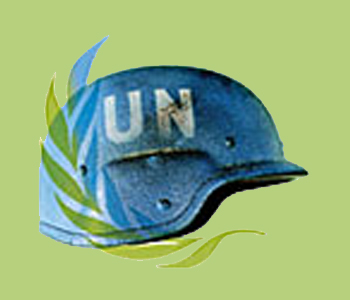 BEIRUT, Lebanon — Twenty-one members of a United Nations peacekeeping force in southern Syria near the Israeli-occupied Golan Heights were taken captive Wednesday, apparently by armed rebels, according to the U.N. and opposition activists.

The action represents a potentially serious escalation of the violence and chaos sweeping Syria, where an armed insurgency seeking to topple the government of President Bashar Assad is nearing its second year.

A man identified as a spokesman for a rebel brigade known as the Martyrs of Yarmouk said in the video that the U.N. personnel would not be released until the Syrian military leaves the vicinity of a nearby village called Jamla, the scene of recent clashes.

If the Syrian forces do not pull back within 24 hours, the rebel spokesman said, the U.N. personnel would be treated as “prisoners of war.” He accused the U.N. of collaborating with Syrian forces.

There was no immediate indication that anyone was injured as the peacekeepers were seized, the U.N. said.

The Security Council and a spokesman for Secretary-General Ban Ki-moon issued statements condemning the “detention” and demanding the immediate release of the monitors. The peacekeepers’ “freedom of movement and safety and security must be respected by all parties,” the statement from the secretary-general’s office said.

The incident apparently occurred when about 30 “armed fighters” detained a convoy of peacekeepers from the U.N. Disengagement Observer Force as the group was on a regular supply mission near an observation post, the U.N. said.

All or most of the peacekeepers are believed to be from the Philippines, and the U.N. has dispatched a team in the region to assess the situation.

The incident comes at a time of increasing tensions near the Golan Heights, as the battles raging in much of Syria have come close to the disputed area recently. Some Syrian artillery shells have landed on the Israeli-occupied side.

On Monday, Israel warned the Security Council that it could not be expected to “stand idle” as Syrian shells continue to land on its territory.

The 1,011-member U.N. observer force has been in the area since 1974, after the 1973 Yom Kippur War. Both sides agreed to a U.N. presence to monitor the cease-fire line between Israeli and Syrian forces. Before the uprising in Syria, the zone had been relatively peaceful for decades.

Israel seized the Golan Heights from Syria in the 1967 Middle East War and later annexed the mountainous plateau in a move never recognized by the international community.

Meanwhile, the U.N. said Wednesday that the number of Syrians who have fled their homeland has officially exceeded 1 million. The U.N. refugee chief warned that Syria was “spiraling toward full-scale disaster.”

The milestone had long been anticipated as the influx of refugees has continued inexorably, straining the resources of neighboring nations, especially Lebanon, Jordan, Turkey and Iraq.

In Syria, the violence is said to have displaced an additional 2-million-plus people from their homes.

Aid groups and international observers have been sounding alarms for months about what they call a humanitarian catastrophe. In fact, officials say many more than 1 million people have fled Syria; the official figures include only those who have formally registered with the U.N. as refugees or are in the process of registering. Large numbers have not registered.

Many have been traumatized by the war, having lost relatives in the violence and left without possessions beyond the clothes on their backs. About half the refugees are children, most younger than 11, the U.N. said. Many find shelter in formal refugee camps close to Syria’s borders, but most have settled in communities, struggling to find work and pay rent.

“With a million people in flight, millions more displaced internally and thousands of people continuing to cross the border every day, Syria is spiraling toward full-scale disaster,” U.N. High Commissioner for Refugees Antonio Guterres said in a statement. “The international humanitarian-response capacity is dangerously stretched. This tragedy has to be stopped.”

A major fear is that the refugee influx could contribute to instability in Lebanon and Iraq, which have fragile political systems.

The Syrian conflict erupted in March 2011 with antigovernment protests and soon became an all-out armed rebellion against Assad. As many as 70,000 have died, according to the U.N. Intense diplomatic efforts to find a solution have failed to achieve a cease-fire.