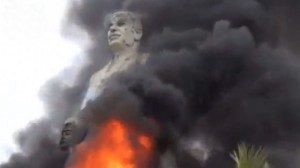 Dozens of Syrian soldiers who had crossed into Iraq for refuge were ambushed Monday with bombs, gunfire and rocket-propelled grenades in an attack that killed 48 of them and heightened concerns that the country could be drawn into Syria’s civil war.

The fact that the soldiers were on Iraqi soil at all raises questions about Baghdad’s apparent willingness to quietly aid the embattled regime of Syrian President Bashar Assad.

The well-coordinated attack, which Iraqi officials blamed on al-Qaida’s Iraq arm, also suggests possible coordination between the militant group and its ideological allies in Syria who rank among the rebels’ most potent fighters.

Iraqi officials said the Syrians had sought refuge through the Rabiya border crossing in northern Iraq during recent clashes with rebels and were being escorted back home through a different crossing farther south when the ambush occurred. Their convoy was struck near Akashat, not far from the Syrian border.

Ali al-Moussawi, a spokesman for Iraq’s prime minister, provided the death toll and said nine Iraqi soldiers were also killed. The Syrians had been disarmed and included some who were wounded, he told The Associated Press.

He said the soldiers had been allowed into Iraq only on humanitarian grounds and insisted that Baghdad was not picking sides in the Syrian conflict.

“We do not want more soldiers to cross our borders and we do not want to be part of the problem,” al-Moussawi said. “We do not support any group against the other in Syria.”

The Iraqi Defense Ministry said 10 additional Syrians were wounded in the assault. In a statement, it warned all parties in the Syrian war against bringing the fight into Iraq, saying its response will be “firm and tough.”

Iraqi officials who provided details of the attack described a carefully orchestrated assault on the Syrians’ convoy, with a senior military intelligence official saying the attackers appeared to have been tipped off ahead of time.

He and another Iraqi official, speaking on condition of anonymity because they weren’t authorized to release the information, said it was unlikely that Syrian rebels had managed to cross into Iraq to carry out the attack.

“This attack bears the hallmarks of the al-Qaida terrorist organization,” said Jassim al-Halbousi, provincial council member in Anbar, the restive western region where the attack happened. “The borders should be secured at the highest level of alert.”

Iraqi Prime Minister Nouri al-Maliki told the AP last week that he feared a victory for rebels in the Syrian civil war would create a new extremist haven and destabilize the wider Middle East, sparking sectarian wars in his own country and in Lebanon.

His comments reflect fears by many Shiite Muslims that Sunni Muslims would come to dominate Syria should Assad be toppled. Assad’s regime is backed by Shiite powerhouse Iran, which has been building ties with the Shiite-led government in Baghdad in recent years.

The war in Syria has sharp sectarian overtones, with predominantly Sunni rebels fighting a regime dominated by Alawites, an offshoot of Shiite Islam. Rebel groups have increasingly embraced radical Islamic ideologies, and some of their greatest battlefield successes have been carried out by Jabhat al-Nusra, a group that the U.S. has designated as a terrorist organization and that it claims has links to al-Qaida.

Iraq’s government has faced more than two months of protests from Sunni Muslims angry over perceived discrimination. Anbar province has been the epicenter for the rallies.

Toby Dodge, a Middle East expert at the London School of Economics, said the fact that Syrian soldiers had been welcomed into Iraq at all is worrying.

“If this goes on, al-Maliki’s government is aligning itself with Iran and the Assad regime against the rest of the Middle East and the will of the Syrian people,” he said. “That is a huge gamble.”

“If this goes on, al-Maliki’s government is aligning itself with Iran and the Assad regime against the rest of the Middle East and the will of the Syrian people,” he said. “That is a huge gamble.”

In Syria, rebels pushed government troops from most of the northern city of Raqqa, on the Euphrates River, setting off celebrations in a central square.

If rebels succeed in taking Raqqa, which has a population of about 500,000, it would be the first time an entire city had fallen into the hands of anti-Assad fighters.

Rebels already hold several neighborhoods in the cities of Aleppo, Homs and Deir el-Zour, as well as suburbs of the capital, Damascus. They also control large areas in the countryside, particularly in the north.

Their advances are a significant blow to Assad, although during the past week his forces have regained control of several villages and towns along a key highway near Aleppo International Airport.

The Britain-based Syrian Observatory for Human Rights said rebels are now in control of “large parts” of Raqqa, which flows through Syria into Iraq. A top police officer was killed and intelligence officers were detained, the group said.

Activists declared Raqqa “liberated” on opposition social media websites Monday. A photo posted on several pro-rebel Facebook pages showed people tearing down a huge poster of Assad and hitting it with their shoes. The activists said the picture was taken inside the feared air force intelligence headquarters in the city.

The Observatory said the leader of Jabhat al-Nusra in Raqqa was killed in the fighting.

Amateur video posted online showed a bronze statue of former President Hafez Assad, the current president’s father and predecessor, being torn to the ground by a rope tied around the statue’s neck. The video appeared consistent with AP reporting.

Amir, an activist in Raqqa, said via Skype that the mood was euphoric in the city when residents and rebels toppled the statue in the main square, but “then the shelling began and everyone fled.”

In Saudi Arabia, U.S. Secretary of State John Kerry and Saudi Foreign Minister Prince Saud al-Faisal together warned Assad that they will boost support to rebels unless he steps down.

Saudi Arabia has been one of the region’s harshest critics of Assad’s regime. In his discussions with Kerry, Saud said he stressed the importance of enabling the population of Syria to exercise its “legitimate right to defend itself against the regime’s killing machine.”

Saud also complained that the Assad regime continues to get weapons from “third parties,” a veiled reference to Russia and Iran.

The Syrian conflict started two years ago as a popular uprising against Assad’s authoritarian rule. After the government cracked down on dissent, the rebels took up arms and the revolt turned into a full-blown civil war. The United Nations estimates that more than 70,000 people have been killed.

Assad maintains his troops are fighting “terrorists” and Islamic extremists seeking to destroy Syria, and he accuses the West and its Gulf Arab allies of supporting them.

Photo: A statue of Hafez Assad, father of Syrian President Bashar Assad, burns after being set on fire by rebel fighters inside the grounds of the General Company of the Euphrates Dam in Al-Raqqa, Syria , February 2013