Kerry: US will ’empower’ Syria opposition 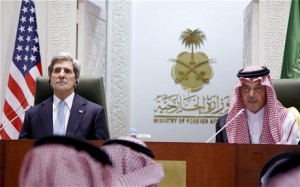 US Secretary of State John Kerry said in Riyadh Monday that Washington will work to “empower” Syria’s opposition, while warning arch-foe Iran that time for talk on Tehran’s nuclear ambitions could run out.

Mr Kerry, on his first tour to the region since becoming the Secretary of State, also met over lunch with Palestinian president Mahmoud Abbas, who flew in to Riyadh unannounced late on Sunday.

Mr Kerry stressed that there was no question of arming the Syrian opposition, even as his Saudi counterpart Prince Saud al-Faisal insisted on the right of Syrians to self-defense.

The United States will continue to work with its “friends to empower the Syrian opposition,” Mr Kerry told reporters during a joint press conference with the Saudi foreign minister.

Asked about reports of arms being sent to Syria’s rebels from countries such as Qatar and Saudi Arabia, Mr Kerry replied: “The moderate opposition has the ability to make sure that the weapons are getting to them and not to the wrong hands.”

However, he added, “there is no guarantee that one weapon or another might not fall in the wrong hands.”

The US has so far refused to arm rebels locked in a two-year war against President Bashar al-Assad’s loyalists.

Several oil-rich monarchies of the six-member Gulf Cooperation Council, notably Saudi Arabia and Qatar, have supported the rebellion against Mr Assad, a staunch ally of their regional arch-foe Iran.

The GCC members are dissatisfied at the refusal of President Barack Obama’s administration to arm Syrian rebels and its perceived lenient attitude towards Tehran, analysts say.

Mr Kerry said his discussions with Gulf officials had also covered ongoing talks between world powers and Iran on its nuclear programme.

Talks with Iran “will not go on for the sake of talks,” he said. “Talks cannot become an instrument for delay that in the end makes the situation more dangerous. So there is a finite amount of time.”

“(Barack) Obama has made it clear that Iran will not get nuclear weapons,” said the top US diplomat. “There is a huge danger of proliferation.”

World powers negotiating with Iran to rein in its nuclear programme concluded another round of talks in Kazakhstan last week, after putting forward a proposal to ease biting sanctions if Tehran halts the sensitive work of enriching uranium.

“Saudi Arabia supports the efforts to resolve the crisis diplomatically,” said the Saudi foreign minister. “We hope that the negotiations will result in putting an end to this problem… the negotiations cannot go on forever.”

World powers accuse Tehran of masking a weapons programme under the guise of a civilian atomic drive. Iran denies these charges.

During his flurry of meetings in Riyadh on Monday, Mr Kerry also held talks with Saudi Crown Prince Salman bin Abdul Aziz, but had no plans for a meeting with King Abdullah, officials said.

Prior to their meeting, Palestinian envoy in Riyadh, Jamal al-Shawbaki, told the official Voice of Palestine radio that Mr Abbas “will present the Palestinian point of view to the new US administration ahead of Obama’s visit”.

Mr Obama is due to meet Israeli and Palestinian leaders in Jerusalem and Ramallah during a visit on March 20-22.

Mr Abbas, in his first meeting with Mr Kerry, will also “highlight Israeli violations in Jerusalem, settlements, and the issue of Palestinian prisoners on hunger strike,” said Mr Shawbaki.

Palestinian-Israeli peace talks have been deadlocked for more than two years.

Mr Abbas wants to renew peace talks in tandem with a freeze on Jewish settlement construction in the occupied West Bank and in east Jerusalem.

US officials said Israeli Prime Minister Benjamin Netanyahu had been made aware of the unscheduled Kerry-Abbas meeting.

After winding up the Saudi leg of his tour later Monday, Mr Kerry will head to Abu Dhabi and then to Qatar.