Israel’s Barak warns Iran on nuclear arms ” We mean it” 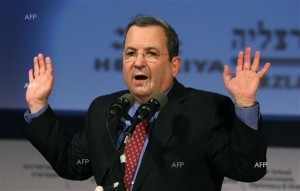 “It is Iran’s pursuit of a nuclear capability which is the greatest challenge facing Israel, the region and the world today,” Barak told thousands of delegates at the opening of the annual conference of the American Israel Public Affairs Committee (AIPAC).

But Barak, stepping down as defense minister as Israeli Prime Minister Benjamin Netanyahu draws up a new cabinet, cast doubt on whether the negotiations, due to resume later this month, would have any success.

“Frankly, while exhausting all diplomatic means is understandable, I do not believe it will lead to a moment of truth when the ayatollahs will give up their nuclear situation. Therefore, all options must remain on the table,” Barak said.

“We expect all those who say it to mean it. Ladies and gentlemen, we mean it. And let me repeat it, we mean it,” he added forcefully, receiving loud applause at the pro-Israel conference.

AIPAC, which touts itself as the most influential US foreign policy lobby, will also hear a speech live from Netanyahu on Monday via video link, following an address by US Vice President Joe Biden.

Some 13,000 people are expected to flock to the three-day event being held at the Washington Convention Center, but the gathering is more muted than in previous years, with neither President Barack Obama nor Israeli President Shimon Peres in attendance.

Obama is preparing to make his first trip as president to Israel in two weeks’ time, and Netanyahu has stayed at home as he seeks to patch together a coalition following January’s elections.

Iran and its nuclear ambitions will top the agenda for Obama’s talks in Israel, along with the war in Syria and the moribund Israeli-Palestinian peace process.

Barak called for “a daring peace initiative vis-a-vis the Palestinians” adding that “a two-state solution is the only viable long-term solution.”

The talks have stalled since late 2010, after the Palestinians insisted that all Israeli settlement building must cease.

But Barak placed the blame for the stalemate squarely on the Palestinians saying “they clearly bear most of the responsibility for past failures.”

Stressing he was speaking in a personal capacity, the outgoing minister also insisted that if Israel could not even reach an interim agreement with the Palestinians “we should consider unilateral steps in order to place a wedge on this extremely dangerous slippery slope toward a bi-national state.

“It involves demarcating a line within which we would have the settlement blocks and a solid Jewish majority for generations to come,” he said.

There have also been fears that Israel could take unilateral action against Tehran, but the threat has somewhat receded after Obama vowed the United States will not pursue a policy of containment if Iran seeks a nuclear weapon.

Iran has denied seeking an atomic bomb, saying its nuclear program is for civilian purposes only.

And he also wished new Pentagon chief Chuck Hagel “all the best in his new role,” adding that “he will no doubt serve his country with the same pride and honor with which he served on the battlefield and in Congress.”

Hagel’s confirmation by Congress met some stiff opposition from US lawmakers over his past statements on Iran’s nuclear program and US-Israeli relations.

Hagel was eventually confirmed last week and he will meet with Barak for the first time as defense secretary on Tuesday.