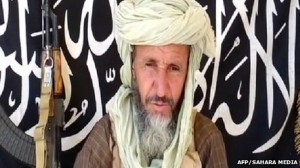 The head of France’s joint chiefs of staff has said that it is “probable” that Islamist commander Abdelhamid Abou Zeid was killed in fighting in Mali.

However, Admiral Edouard Guillaud told French radio that until a body was found the death could not be confirmed.

Chad and France are among several countries fighting militants in Mali.

Regarding reports of Belmokhtar’s death, Adm Guillaud told the Europe 1 station that he was “extremely cautious”, pointing to reports on jihadist internet forums that he may still be alive.

Veteran Islamist leader Belmokhtar was behind an attack on a gas plant in Algeria in January in which at least 37 hostages were killed.

However, the same activist confirmed Abou Zeid’s death, saying he was killed in a French bombardment.

On Saturday, a French soldier was killed in the Adrar des Ifoghas mountains in northern Mali, the third French serviceman to die since the start of military intervention in January.

The death was in the same region where the Chadian army reported the deaths of Abou Zeid and Belmokhtar.

Asked about the location of French hostages kidnapped by Islamists in North Africa in recent years, Adm Guillaud said he had no information on their whereabouts.

He said that they were not in the area being hit by French forces, adding that it was possible they had been moved and “dispersed”, but not necessarily to another country.

Islamist rebels withdrew to the remote mountain range near the border with Algeria after French troops backed by helicopters and jets advanced to capture the main towns in northern Mali in January.

Adm Guillaud said that French forces had uncovered “literally an industrial terrorist organisation” in the areas they had captured, with around 50 stores of weapons and more than a dozen bomb-making workshops.

Islamist rebels expanded their control across northern Mali a year ago after a military coup in the capital Bamako, in the south.

France intervened militarily in January amid fears they were preparing to advance on Bamako.

Mali’s army and troops from several African countries, including 2,000 from Chad, have also been involved in the fighting.

Also on Monday, UK Foreign Secretary William Hague arrived in the Malian capital, Bamako, to hold talks with the Malian government and commanders of the African-led intervention force.