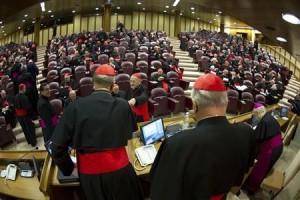 Roman Catholic cardinals filed into the Vatican on Monday for preliminary meetings to sketch an identikit for the next pope and ponder who among them might be best to lead a church beset by crises.

They arrived by private car, taxi and minibus at the gates of the Vatican for gatherings known as general congregations, closed-door meetings in which they will get to know each other and decide when to start a conclave to choose a man to lead the 1.2 billion member Church.

The Vatican appears to be aiming to have a new pope elected next week and officially installed several days later so he can preside over the Holy Week ceremonies starting with Palm Sunday on March 24 and culminating in Easter the following Sunday.

Pope Benedict left the Church in a state of shock when he announced last month that he would be the first pontiff in 600 years to resign instead of ruling for life. He formally stepped down on Thursday, leaving the papacy vacant.

High on the agenda at the general congregations will be the daunting challenges that will face the next pontiff, including the sexual abuse crisis that has rocked the Church and last year’s “Vatileaks” scandal which exposed corruption and rivalries in the Vatican’s bureaucracy.

“We need a man of governance, by that I mean a man who is able with the people he chooses to help him in an intimate way to govern the Church,” Cardinal Cormac Murphy-O’Connor, the former Archbishop of Westminster in London, told BBC radio.

“Among the things we will be talking about out here are precisely the need in looking for a new pope for these failings that have happened again to be treated, to be faced strongly.”

The cardinals, numbering about 150, are expected to hold one or two meetings a day. The Vatican seems keen to have only a week of preliminary talks so the 115 “cardinal electors” aged under 80 can enter the Sistine Chapel for the conclave next week. The exact date for its start has not been decided.

“We have meetings all this week to get to know each other better and consider the situations that we face,” said Cardinal Andre Vingt-Trois of Paris as he entered. He said he could not say at this stage “who will be the best one to respond to them”.

Cardinals expect to be briefed on a secret report to the pope on the problems highlighted by the Vatileaks scandal, when documents which alleged corruption in the Vatican and infighting over the running of its bank were leaked to the media.

The crisis involving sexual abuse of children by priests and inappropriate behavior among adult clerics continues to haunt the Church and has rarely been out of the headlines.

One elector – Cardinal Keith O’Brien – quit as Edinburgh archbishop last week and pulled out of attending the conclave because of accusations that he behaved inappropriately with priests and seminarians in the past.

O’Brien initially denied the allegations but issued a statement late on Sunday apologizing because “my sexual conduct has fallen below the standards expected of me as a priest, archbishop and cardinal”.

“The church has a particular responsibility to set a moral standard and that’s what it tries to do and if sometimes it doesn’t, if it fails with certain individuals occasionally it’s going to repent and carry on,” said Murphy-O’Connor, who will not take part in the conclave as he is aged over 80.

He said about O’Brien: “I think that’s clearly very sad and the person involved has in fact apologized and is now going to leave, as it were, public life as a priest, as a bishop.”

The preliminary meetings also give cardinals the chance to size up potential candidates by watching them closely in the debates and checking discreetly with other cardinals about their qualifications or any skeletons in their closets.

Cardinals never reveal publicly who they prefer but drop hints in interviews by discussing the identikit for their ideal candidate. The most frequently mentioned quality here is an ability to communicate the Catholic faith convincingly.

Most cardinals say the new pope could come from outside Europe, but it is not clear if the conclave, which has a slight majority of European cardinals, will break the long-standing tradition of choosing men only from the continent.

In an interview with Reuters, Cardinal Sandri, 69, said the next pope should not be chosen according to a geographic area but must be a “saintly man” who was “best qualified”.

Sandri said one of the greatest problems facing the Church was “the loss of faith” among many who had “turned their back on God” and need to be brought back into the life of the church.

He also said the Church must open itself up to women in the next pontificate, giving them more decision-making positions in the Vatican and beyond.

Photo: Cardinals attends a meeting at the Synod Hall in the Vatican March 4, 2013. Preparations for electing Roman Catholicism’s new leader begin in earnest on Monday as the College of Cardinals opens daily talks to sketch an identikit for the next pope and ponder who among them might fit it. REUTERS/Osservatore Romano