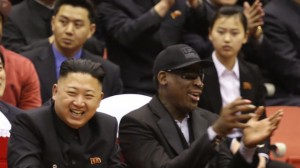 Rodman, who has made headlines for several days as a result of his trip to North Korea with the Harlem Globetrotters, told ABC’s “This Week” that the 28-year-old leader “doesn’t want to do war.”

Rodman is the highest-profile American to meet Kim since he took power in December 2011 after his father’s death.

He did the interview in the network’s New York studio dressed in sunglasses and sports coat emblazoned with images of U.S. dollar bills.

The trip took place amid strained ties between the United States and North Korea over that country’s recent underground nuclear test.

The State Department on Friday distanced itself from Rodman’s visit.

Rodman also defended the suggestion that he’s putting out propaganda and attempted to explain why he earlier called Kim his “friend for life,” despite widespread reports about the country’s imprisoning citizens and other human rights violations.