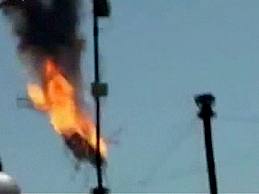 A helicopter travelling to an airport near the Syrian city of Aleppo was shot down and sent crashing to the ground by Free Syrian Army (FSA) fighters on Saturday.

The FSA, who are the main opposition group fighting to topple the Syrian government led by President Bashar al-Assad, sent the aircraft crashing to the ground as it made it to Menagh Airport.

The rebels celebrated their second successful shooting of a helicopter in the space of four days.