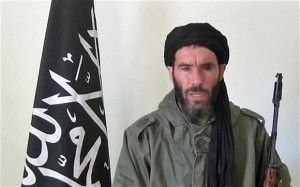 A Chad military spokesman said Mokhtar Belmokhtar, one of the world’s most wanted terrorists, died on Saturday in an assault on an Islamist rebel base in northern Mali.

Belmokhtar was at the centre of an international manhunt after at least 37 foreign hostages, including six Britons, were killed in a siege at the In Amenas gas complex in eastern Algeria last January.

The French military, which is leading the offensive in northern Mali assisted by several African nations, said it could not confirm the report.

Belmokhtar, 40, who headed a militant brigade called Witnesses in Blood, became one of the world’s most wanted men after the gas complex, operated by BP together with Norway’s Statoil and Sonatrach, Algeria’s state energy company, was attacked by gunmen on Jan 16.

The militants seized hundreds of hostages leading to a four-day siege in the desert. The Algerian army launched an assault on the complex, ending in a bloodbath on Jan 19.

In a video posted online Belmokhtar later confirmed his involvement in the attack, describing the siege as a “blessed operation”, and demanding that France withdraw its troops from Mali.

In the message, recorded before the final stand-off with the Algerian army, Belmokhtar said the operation was carried out by 40 “jihadists”, including several Westerners. The raid is thought to have been led by Abdul Rahman al-Nigeri. Belmokhtar’s death, if confirmed, would be a major blow to Islamist rebels in northern Mali who have been pushed into their mountain strongholds by French and African forces. The Algerian-born Belmokhtar, linked to a string of kidnappings in North Africa in the past decade, had been dubbed “the uncatchable” by the French.

He is said to have become attracted to Islamism as a teenage schoolboy, travelling to Afghanistan at the end of the war against the Soviets in the early 1990s.

This launched him on a two-decade career of Islamic militancy, initially as a member of Algeria’s Islamic Armed Group (GIA) in the country’s civil war. He then became a joint founder of the Salafist Group for Preaching and Combat (GSPC), which extended its attacks against security forces into countries along the southern fringe of the Sahara. He lost his left eye while handling explosives in the 1990s fighting Algerian government troops as head of the Shahada Katibat [Martyrs Battallion] in the Sahara.

The GSPC later took up the franchise of al-Qaeda’s North Africa wing, under the name al-Qaeda in the Islamic Maghreb (AQIM). Belmokhtar headed one of two AQIM battalions in Algeria’s southern desert bordering Mali.

Belmokhtar was sentenced by an Algerian court to life imprisonment in absentia in connection with the killing of 10 Algerian customs agents in 2007.

His reputation as a “gangster-jihadist” involved in arms and cigarette smuggling earned him the nickname “Mister Malboro” among locals in the Sahara.

The alleged death of Belmokhtar came a day after Chad’s president said their troops killed Abou Zeid, the other main al-Qaeda commander in the region.

In a speech on Friday, Francois Hollande, the French president, said the operation in Mali was in its final stage.

“Terrorist groups have taken refuge and are hiding in an especially difficult zone,” he said. “Information is out there. I don’t have to confirm it because we must reach the end of the operation.”