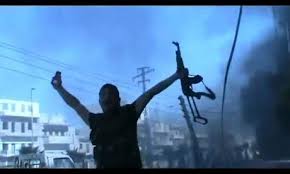 Free Syrian Army rebels traded gunfire for mortar rounds from President Bashar al Assad’s troops along a critical fault line separating the suburb of Jawbar from Damascus itself, said Baraa, a spokesman for the local Revolutionary Military Council, who gave only his first name for safety reasons.

“There are heavy ongoing clashes at Eight Azar. If we capture the area it means we have reached the heart of the capital. It means we can cross into Damascus,” Baraa told CNN.

Rebels appear to be inching closer to a decisive battle for the capital, al-Assad’s stronghold, but after nearly two years of fighting the opposition remains wary.

“We are still several hundred meters away and there are many snipers positioned on the buildings and tanks in the area. We expect very intense fighting over the next several days,” Baraa said.

The Free Syrian Army is embroiled in near-constant clashes along three front lines on the western edge of the suburb of Jawbar — the Eight Azar entrance, a military air force building, and the vital 6 Teshreen Road dividing the government-controlled suburb of Qaboun from Jawbar.

Reinforcements are arriving from eastern Ghouta and other suburbs, Baraa said, and are being dispersed evenly to all three front lines.

The opposition Damascus Media Office told CNN on Saturday that the Free Syrian Army was now in control of a majority of Jawbar. Clashes are constant along a thin line leading to the edges of Abassiyeen Square, it said.

The regime has stepped up its offensive using fighter jets and missiles to shell the suburb, it said.

For civilians pinned down by the heavy fighting, survival is a daily struggle and escape a distant possibility.

“There are still civilians here and they tell us, where can we go? All of Syria is a battle ground — there is nowhere to hide,” Baraa said.

Historically the suburb of Jawbar has been a holy site for Jews, drawing pilgrims to one of the oldest standing synagogues in the world. Now bodies line the streets towards the central Abassiyeen Square, Baraa claimed, and the 2,000-year-old Jawbar Synagogue sustains artillery attacks.

“Just as the homes and mosques are being struck, the synagogue was struck too. The regime’s random shelling does not distinguish between buildings — it can hit anything,” Baraa said.

Syrian state media reported fighting in the Damascus suburbs, claiming government armed forces were pursuing armed terrorist groups in the area and had inflicted heavy losses after a string of operations.

Meanwhile, violent clashes have been taking place in al-Raqa province, near Syria’s northern border with Turkey, according to the Syrian Observatory for Human Rights, a UK-based opposition group.

Fighting began Saturday morning between fighters from many rebel battalions and regime forces, around the al-Raqa city, around the Mashlab and Furusiya checkpoints, and around the Hajana building in the city, the group said.

The sound of explosions rocked the city and smoke rose overhead, where helicopters hovered, the Observatory said. Several areas in the city and its outskirts were bombarded by government forces.

The group reported dozens of deaths on both sides.

By the end of Friday, 125 people were killed across Syria, including 54 in Aleppo, according to the Local Coordination Committees for Syria, a network of opposition activists.

The unrest began in March 2011, when al-Assad’s government began a brutal crackdown on demonstrators calling for enhanced political freedoms.

The protest movement eventually devolved into an armed conflict, one that has devastated cities and towns around the country and has already claimed nearly 70,000 lives.

It has also spurred more than 720,000 Syrians to flee to neighboring nations, according to the United Nations’ refugee agency.