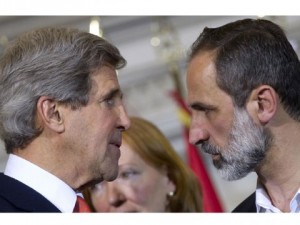 It should come as no surprise that Syria‘s rebels were underwhelmed by Thursday’s U.S. pledge of $60 million in direct aid: Although the announcement by Secretary of State John Kerry in Rome marked Washington‘s first direct assistance to the Western backed opposition coalition and reportedly may be accompanied by non-lethal equipment such as body armor and night-vision gear for rebel forces, the pledges fell short of the rebels’ principal demand: weapons.

“Nothing has changed,” the Wall Street Journal was told Thursday by Mohammad Sarmini of the Syrian National Council, the largest bloc in the Western-backed opposition Coalition. “The U.S. position of no arming [the rebels] is crystal clear.” While Sarmini’s group had boycotted the Rome meeting at which Kerry spoke in protest at the limited support on offered to the rebels, the Secretary of State had managed to persuade Coalition leader Moaz al-Khatib to reverse his own plan to stay away. Still, even Khatib, during a media appearance with Kerry, reportedly complained of “an international decision to prevent arming Syrian rebels with quality arms.”

The U.S. has declined to supply the rebels with the heavier weaponry that could help neutralize the regime’s advantages in air power, armor and artillery, and is widely reported to have also restrained many of its allies from doing so. Still, Saudi Arabia has reportedly recently managed to supply some rebel forces with anti-tank and anti-aircraft missiles, and has openly agitated for the West to do the same. But the Administration sees arming the rebels — a plethora of small armed groups, some of the most effective among them being jihadists, and lacking a single overarching chain of command or political leadership — as a risky bet.

Thus Thursday’s more cautious commitment of assistance to the opposition effort, which Kerry and other Western officials stressed is aimed at forcing the regime to accept a political settlement that would include the ouster of President Bashar al-Assad. And the U.S. continues to press the opposition Coalition to do more to demonstrate to millions of uncommitted Syrians that it represents a credible alternative to the Assad regime and can ensure their safety and well-being.

The Rome meeting of the group of Arab and Western allies of the opposition called, in its final communique, for the regime to accept conditions for a political solution, “including the issue of President Assad’s stepping aside, stopping massacres and freeing prisoners kept in appalling number and conditions.”

The gathered foreign ministers also “stressed that the window of opportunity for negotiations cannot be used by the regime to buy time”, calling for renewed efforts to operationalize the peace proposals of U.N. Special Envoy Lahkdar Brahimi and for further discussion on ways to step up support for the opposition.

“None of this changes the equation,” says University of Oklahoma Syria expert Professor Joshua Landis. “The real question is what comes next, and whether or not this opens the way to greater intervention.” That view is echoed by a Damascus-based analyst who maintains contact with Syrian regime officials and requested anonymity for that reason. “Everyone is waiting to see whether the U.S. changes its stance on Syria and takes a lead,” says the analyst, “but at least until recently, President Obama has made clear he is not prepared to risk being sucked into another Mideast conflict.”

Some see the Obama Administration’s latest moves, limits notwithstanding, as breaking a taboo on direct assistance to the rebels — and thereby potentially leading to more robust support. Andrew Tabler of the Washington Institute for Near East Policy, an advocate of stronger intervention, sees the assistance announced Thursday portending greater involvement in the effort to oust Assad precisely because there’s so little prospect of a political settlement.

“[Administration officials] are still reluctant, so they’re moving incrementally,” Tabler told the New York Times. “But the Obama administration has to look at one reality: what they have done [thus far] isn’t working.”

While Landis agrees that those fighting for the regime are unlikely to accept a political solution that effectively requires its collapse, he believes the Administration remains leery of being drawn directly into a very messy and protracted conflict with potentially cataclysmic regional consequences. “Syria is mission-creep waiting to happen,” he warns. “There’s no way to avoid it, given the scale of the problem emerging on the ground in Syria as the state comes apart. In fact, the most convincing argument for more direct intervention has been that as perilous as intervention appears to be today, we will only face an even more dangerous situation if we don’t get involved.”

The problem is that the conflict is not simply over who occupies the seat of power, but has morphed into a more deep-rooted civil conflict that threatens Syria’s survival as a nation-state. “It’s now clear that Syria is not undergoing a violent transition from one regime to another,” noted NATO researcher Jean-Loup Samaan earlier this week. “In fact, the country is enduring a process of disintegration of its state structures. Planners for a post-Assad Syria are no longer eyeing the potential successors of Assad but [are looking] at the bewildering landscape of non-state actors that fight each other over the conquest of what will be eventually left of the Syrian state.”

It’s precisely their shared desire to avoid having to contend with the fallout from a breakup of the Syrian state that has lately seen Russia and the U.S. signal greater cooperation on seeking a political settlement. But any expectation that diplomacy — or the grinding strategic stalemate after two years of warfare that have left more than 70,000 Syrians dead and millions displaced — will propel the two sides towards negotiations ought to be taken with a pinch of salt, warns the Damascus-based analyst. “Even though we may be witnessing the beginnings of the destruction of Damascus as a city, there is no prospect whatsoever of any movement on the political track – there’s simply nothing to work with for anyone hoping to broker such a solution,” he warns. “If the regime changed course from its current strategy of seeking a military solution to the rebellion and instead countenanced some form of compromise, it would very likely collapse from within. Both the regime’s enemies and its allies know this. Both sides are making noises about a political solution simply to better position themselves in a zero-sum fight.”

Thus the grim consensus among analysts that the bloodletting in Syria is likely to get a lot worse before it gets any better. And also the probability that it will become an increasingly nettlesome challenge for a U.S. Administration that has dedicated itself, as President Obama noted in his inaugural address, to ending “a decade of war”.