Syrian Rebels seized a Scud missile from the army 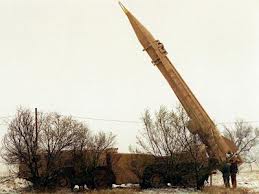 The rebels claimed on Friday that they took hold of a Scud missile equipped with chemical warheads in Deir al-Zour allegedly pertaining to the regime.

In a video posted on YouTube the rebels revealed that the Syrian regime uses such rockets to shell opposition towns and cities, an accusation that Syrian Information Minister Omran al-Zoubi denied.

The missile in question is over eleven meters long and travels several times faster than the speed of sound. It is among the tactical weapons designed by the USSR during the Cold War, and it is capable of carrying large amounts of explosives or even non-conventional warheads.

The rebels have been leading a violent uprising against the regime of President Bashar al-Assad, which has so far killed more than 70,000 people since its outbreak in March 2011, according to figures released by the United Nations.