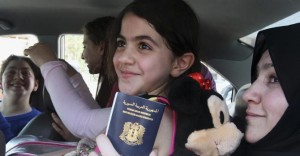 BEIRUT, Lebanon – The Syrian government appeared to make a significant concession to the opposition Wednesday, agreeing to renew the passports of millions of Syrians living abroad. A leading dissident figure had publicly pressed for the change.

The state-run news service announced that the Interior Ministry had directed that expired passports be renewed for two years “regardless of the reasons that had earlier prevented their renewal, and without obtaining the necessary authorizations.”

The pro-government daily Al Watan reported that the decision had been communicated to Syrian embassies abroad. The newspaper said more than 10 million Syrian nationals live outside Syria.

Syrian expatriates have complained that embassies and consulates have refused to renew their passports, insisting that holders of expired documents return to Syria to sort out their paperwork. But many have resisted going back to their homeland, fearing they may face arrest or be caught up in the nation’s violence.

Consequently, many Syrian expatriates have been left without valid documents needed for international travel, visa applications or identification purposes.

The passport extension was a key demand from Moaz Khatib, who heads the principal opposition umbrella group, the National Coalition for Syrian Revolutionary and Opposition Forces.

Late last month, Khatib offered to meet with representatives of President Bashar Assad for peace talks if the government met two conditions: releasing tens of thousands of prisoners and agreeing to renew the passports of expatriate Syrians, a category that includes many exiled regime opponents.

This week, in another major concession, Syrian Foreign Minister Walid Moallem said in Moscow that his government was willing to speak with armed opponents — whom Damascus routinely condemns as “terrorists.”

However, despite the apparent concessions from Damascus, prospects for negotiations to end the almost two-year Syrian conflict still seem remote.

The Syrian opposition coalition and its leader, Khatib, have since clarified that any talks must lead to Assad’s ouster — a precondition categorically rejected by Damascus. The regime has made it clear it is not going to negotiate its own exit.

Russia, which says it is seeking to broker peace talks, accused the opposition leadership of working to undercut any negotiations.

“It seems extremists, who bet on a military solution to Syria’s problems and block initiatives to start dialogue, have for now come to dominate the ranks of the Syrian opposition,” Russian Foreign Minister Sergei Lavrov declared this week.

Syrian dissidents, including Khatib, are expected to meet Thursday with Secretary of State John F. Kerry at the latest gathering of the so-called Friends of Syria alliance, which includes the United States, Turkey, Saudi Arabia and other nations that have called for Assad’s ouster. The group was set up to provide funding and other aid to the Syrian opposition.

Last week, the dissident bloc threatened to boycott Thursday’s session in Rome, saying the West and its allies had not done enough to help topple Assad. The coalition has been demanding more weapons. But Washington put pressure on the group to reverse its decision.

The turnaround averted a potential embarrassment for Kerry on his first international trip as the nation’s top diplomat.

Washington has said it is opposed to providing arms directly to Syrian rebels. However, reports indicate that the Obama administration may be considering a significant boost in aid, possibly including non-lethal military equipment such as body armor.

“The Syrian opposition is not going to be dangling in the wind, wondering where the support is, or if it’s coming,” Kerry told reporters in London on Monday. “And we are determined to change the calculation on the ground for President Assad.”

The new secretary of state has repeatedly suggested that Assad’s “calculation” can be altered so that he does agree to relinquish power. Assad, though, may have other ideas. Last year, the Syrian president told a Russian interviewer that he was born in Syria and had every intention of dying there.