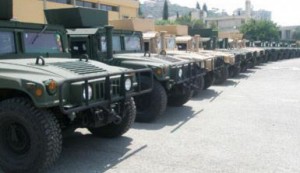 The Lebanese Armed Forces Logistics brigade received on Tuesday, 69 additional Humvee vehicles through Beirut’s port as part of the US aid program planned for the LAF, LBC reported

The LAF is expected to receive additional vehicles and gunboats in a few months.