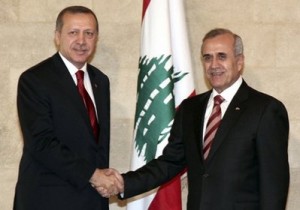 “Every day a large number of innocent children and women fall dead in Syria,” Erdogan, a key backer of Syria’s opposition, said in a speech in the United Arab Emirates.

He stressed on the need to “respect the neutral position of [Lebanon] which means not interfering in the internal affairs of other countries, notably Syria.”

Erdogan and Suleiman’s remarks came after fierce fighting erupted overnight on the Syria-Lebanon border. Syrian troops and unknown gunmen engaged in battles that resulted in the death of a Lebanese man. Four were also wounded according to a Lebanese security source.

Turkey’s southern neighbor has been locked in a 23-month-long conflict in which the United Nations estimates over 70,000 people have been killed.

On the ground, hostilities continued in several flashpoints on Sunday, a day after at least 110 people were killed, according to the Observatory.

In northern Syria, rebels closed in on a police academy in the town of Khan al-Assal in the province of Aleppo, as warplanes bombarded their positions there, the watchdog said.

“Should they take the academy building, the whole of northern Aleppo province will fall out of regime control,” said Observatory director Rami Abdel Rahman.

The rebels already have under their control large swathes of northern Syria, chiefly in Idlib province to the northwest, and Raqa and Hasake east of Aleppo.