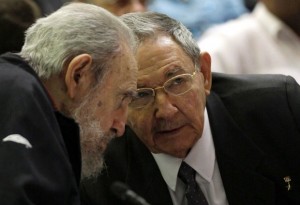 Cuban President Raul Castro said Sunday that he would step down from power in 2018, when his second term as president is set to end.

The announcement came shortly after the country’s National Assembly re-elected Castro to a second five-year term and tapped Miguel Diaz-Canel to be first vice president.

Castro was officially elected president of the island nation in 2008.

Diaz-Canel is an engineer in his early 50s. He has served as minister of higher education and last year was tapped to be vice president of the council of ministers.

Castro spoke glowingly of Diaz-Canel, saying his rise marks a “definitive step in the configuration of the future leadership of the country, through the gradual and organized transfer to the new generation taking over the main roles.”

In 2006, Castro took over from his ailing, older brother, Fidel Castro, whom he quoted liberally on Sunday.

“I quote: ‘Revolution is the sense of the historical moment, to change everything that must change. It is equality and freedom. It is to treat and treat others as human beings. It is to emancipate ourselves with our own efforts. It is to defy powerful forces in and out of the social and national context … It is to fight for our dream of justice for Cuba and the world, the fundamentals of our patriotism, and socialism, and our internationalism.’ May this marvelous definition serve as a guide for the new generations of patriots and Cuban revolutionaries,” Castro said.

Photo: Cuba’s leader Fidel Castro (L) and his brother Cuba’s President Raul Castro talk during the opening session of the National Assemby in Havana, Cuba, Sunday, Feb. 24, 2012. Cuba’s parliament reconvened Sunday and named Raul Castro to a new five-year-term as president. Raul Castro fueled speculation on Friday when he talked of his possible retirement and suggested he has plans to resign at some point.