33 fans injured when car sails into fence at Daytona 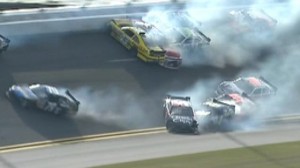 At least 33 fans were injured Saturday during a NASCAR race when a car flew into the fence at Daytona International Speedway, hurling a tire and large pieces of debris into the stands.

The accident happened on the last lap of the second-tier Nationwide Series race on the eve of Sunday’s Daytona 500, which officials said would go on as scheduled.

The crash began as the field approached the checkered flag and leader Regan Smith attempted to block Brad Keselowski to preserve the win. That triggered a chain reaction, and rookie Kyle Larson hit the cars in front of him and went airborne into the fence.

The entire front end was sheared off Larson’s car, and his burning engine wedged through a gaping hole in the fence. Chunks of debris from the car were thrown into the stands, including a tire that cleared the top of the fence and landed midway up the spectator section closest to the track.

The 20-year-old Larson stood in shock several yards away from his car as fans in the stands waived frantically for help. Smoke from the burning engine briefly clouded the area, and emergency vehicles descended on the scene.

Ambulance sirens could be heard wailing behind the grandstands at a time the race winner would typically be doing celebratory burnouts.

“It was freaky. When I looked to my right, the accident happened,” said Rick Harpster of Orange Park, Fla., who had a bird’s-eye view of the wreck. “I looked over and I see in the stands right now because that was … I could see it all in my mirror, and it didn’t look good from where I was at.”

The accident spread into the upper deck and emergency crews treated fans on both levels. There were five stretchers that appeared to be carrying fans out, and a helicopter flew overhead. A forklift was used to pluck Larson’s engine out of the fence.

It was a chaotic finish to a race that was stopped for nearly 20 minutes five laps from the finish by a 13-car accident that sent driver Michael Annett to a hospital, where his Richard Petty Motorsports team said he would be held overnight with bruising to his chest.

The race resumed with three laps to go, and the final accident occurred with Smith trying to hold off Keselowski through the final turn.

“I tried to throw a block. It’s Daytona, you want to go for the win here,” Smith said. “I don’t know how you can play it any different other than concede second place, and I wasn’t willing to do that today. Our job is to put them in position to win, and it was, and it didn’t work out.”

As the cars began wrecking all around Smith and Keselowski, Stewart slid through for the win, but Larson plowed into Keselowski and his car was sent airborne into the stands. When Larson’s car came to a stop, it was missing its entire front end. The 20-year-old, who made his Daytona debut this week, stood apparently stunned, hands on his hips, several feet away from his car, before finally making the mandatory trip to the care center.

He said his first thought was with the fans.

“I hope all the fans are OK and all the drivers are all right,” Larson said. “I took a couple big hits there and saw my engine was gone. Just hope everybody’s all right.”

s of the Nationwide race. He pulled out of the event following the accident.

“Honestly, the race itself pales in comparison to the injuries sustained by the fans,” said Chip Ganassi, the team owner who has Larson in his driver development program. “Our thoughts and prayers go out to all the fans that were injured as a result of the crash. As for Kyle, I am very happy that he is OK.”

Keselowski watched a replay of the final accident, and said his first thoughts were with the fans. As for the accident, he agreed he tried to make a winning move and Smith tried to block.

“He felt like that’s what he had to do, and that’s his right. The chaos comes with it,” Keselowski said. “I made the move and he blocked it, and the two of us got together and started the chain events that caused that wreck. First and foremost, just want to make sure everyone in the stands is OK and we’re thinking about them.”

Keselowski said the incident could cast a pall on the Daytona 500.

“I think until we know exactly the statuses of everyone involved, it’s hard to lock yourself into the 500,” Keselowski said. “Hopefully, we’ll know soon and hopefully everyone’s OK. And if that’s the case, we’ll staring focusing on Sunday.”