The website of the Lebanese Parliament was hacked Saturday morning by a group that identified itself as “Team Kuwaiti Hackers” and posted the photo of Sheikh Ahmad al-Assir of Bilal Ben Rabah Mosque on the main page and displayed a message opposing Hezbollah and the regime of Syrian President Bashar al-Assad. 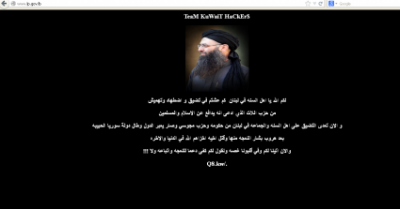 The message, addressed to “the Sunni population in Lebanon” said that Hezbollah has always bullied the Sunnis in Lebanon and is now trying to do the same in the war-torn Syria.

The message also condemned any form of support for Assad, describing him as a “sheep.”

The secretary general of the parliament issued a statement shortly after the hacking saying that the relevant directorate is working on restoring the website to normal.

The statement also warned the hackers will be judicially pursued by the relevant authorities.

In an interview with LBCI Sheikh Assir denied any links to the hacking, denounced it and urged the hackers to remove his picture