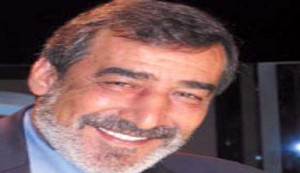 Syrian actor Sabah Obeid passed away at the age of 63, LBC reported

He has been for over a month in a coma which was caused by a stroke.

He will be burid in his home town in Latakia, according to SANA

Obeid, who was recently elected as Member of the Syrian People’s Council, started his career in 1960.

He held several positions, including the head of the Syrian Art Association.