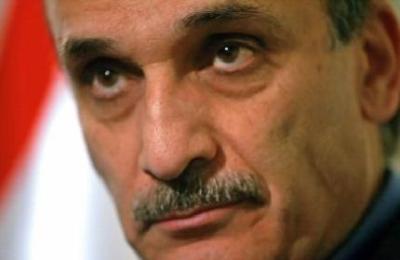 During a Friday televised speech , Lebanese Forces leader Samir Geagea called on his allies in the March 14 coalition to exert all possible efforts to reach a consensus on a new electoral law.

“I call on all parties and particularly our allies to offer sacrifices in order to reach consensus on whatever electoral law can be agreed on.” Geagea said and added

We are against sectarian mobilization … We are against challenging others, but we want a new electoral law. We are a party of March 14 …We are a party of the Cedar Revolution. Instead of cursing the darkness of the Orthodox gathering law day and night lets light a small candle for the sake of a consensus law that we can all agree on.

His comment comes after Maronite Patriarch Cardinal Bechara Boutros al-Rai hosted a meeting on Thursday in Bkirki for the leaders of the Christian parties to evaluate the current situations regarding the electoral law.

“The politicians evaluated the current situation regarding the new electoral law and voiced their willingness to consider any constitutional proposal which provides proper and fair representation,” a Bkirki statement said following the meeting.

Central News Agency reported that Patriarch Rai had called for the meeting “in order for them to agree on a new electoral law.”

CNA added that President Michel Suleiman, who had held talks with Rai at the Baabda Palace earlier on Thursday, had pushed for efforts to be exerted in order to avert the adoption of the Orthodox Gathering law in the elections, which are scheduled to be held in June.

Suleiman urged the need to reach consensus over a new electoral law since he thinks that the Orthodox Gathering proposal “threatens to create sectarian and political division in Lebanon,” CNA added

The parliament’s joint commissions approved the controversial Orthodox law, which calls for proportional voting along sectarian lines. The Orthodox proposal was backed by the majority of Christian parties and opposed by the Future Movement, the Progressive Socialist Party, the National Liberal Party, and numerous independent Christian MPs.

Members of the Lebanese Forces and the Phalange parliamentary blocs are split over the so-called Orthodox Gathering proposal and several of them could reject it if put for a vote in parliament, informed sources told Al Hayat in a report published on Friday.

According to the report Phalange MPs Nadim Gemayel, Elie Marouni and Fadi al-Habr in addition to LF lawmakers Joseph al-Maalouf and Antoine Abu Khater could vote against the draft-law or not attend a parliamentary session if Speaker Nabih Berri calls on the General Assembly to meet.

The absence of the five MPs would lower the number of the backers for the Orthodox proposal to 63 or 64, shattering a possible victory for its supporters in the 128-member parliament, they said.

Reports have also said that the two MPs of the Syrian Social National Party, Assaad Hardan and Marwan Fares, are among those who reject the proposal in addition to Baath party lawmaker Assem Qanso.