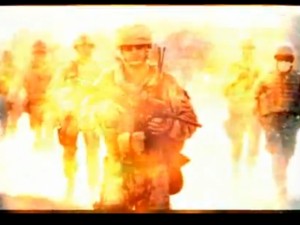 North Korea has released a new propaganda video that shows President Obama and United States troops in flames and credits Washington with leading the impoverished country to become a proud nuclear power.

Songs, operas and novels that stoke hatred against the United States and belittle South Korea are daily fare for North Koreans living under a leadership that uses propaganda as a critical tool of governing. In the last several years, the country has taken its campaign to the Internet, posting thousands of videos onto YouTube that provide outsiders with rare glimpses into the world of North Korean propaganda.

More recently, the country’s propagandists have been busy trumpeting the successful launch of a satellite in December and a Feb. 12 nuclear test, telling North Koreans that their country was becoming a high-tech nuclear power under its young leader, Kim Jong-un.

“Thanks to the Americans,” the latest work by the propagandists, is a 90-second video that was uploaded to YouTube by the North’s official Uriminzokkiri Web site on Sunday. (THe copy posted on YouTube was removed on Wednesday for apparent copyright violation.)

“It is not incorrect to say that the United States’ gangster-like policy of hostility prompted us to become a most strong military power,” says the text that scrolls across the screen. “Thus it can be said that it was ‘thanks to’ the Americans that we conducted a nuclear test.”

In the video, flames are superimposed on footage of Mr. Obama in Congress, American troops and screen shots of a South Korean television station reporting the North’s nuclear test. It ends with an animated simulation of a nuclear device exploding in an underground test site.

The scorching of the United States in “nuclear flames” or a “nuclear holocaust” is a recurring theme in North Korean statements. A ubiquitous propaganda poster in North Korean towns calls for a “score-settling war” against the Americans.

While North Korea has faced chronic food shortages and growing trade sanctions, its propaganda strives to inspire nationalistic pride among its people, portraying their country as a small nation prospering despite the constant bullying of the “imperialist” Americans.

Part of another video, posted on YouTube by the country’s Korean Central Television on Feb. 12, showed a boy wearing a red scarf singing a song against the backdrop of rockets flying into space and satellites circling the Earth.

“We will fill the space with satellites,” the boy sang. “We will grow to be conquerors of the space.”

Another video posted online earlier this month showed a North Korean man dreaming about circling Earth on a homemade spacecraft and looking down to see the Korean Peninsula unified and Manhattan being attacked by missiles and going up in smoke.