Rally in Beirut against the Orthodox electoral law 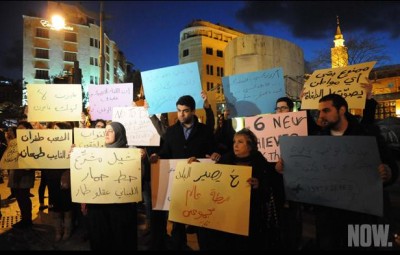 A number of civil society activists held aprotest Tuesday in Downtown Beirut , near the parliament building to protest against the approval of the Orthodox electoral law proposal by the parliament committee.

Antoine Haddad leader of the Democratic Renewal Movement warned that the “Orthodox Gathering’s electoral proposal would drag us several centuries into the past and strip Lebanese citizens of their right to vote for a candidate of a different sect, “National News Agency quoted him as saying.

Nadine Mouawwad, another activist said: “We were surprised by the parliamentary committees’ decision concerning the electoral law and we consider this law as illegitimate because it creates discrimination among citizens. We are against this proposal and we demand a civil state that can achieve the aspirations of all the Lebanese”.

She added : “They want us to vote like sheep”

The protesters held banners denouncing the Orthodox electoral draft and calling for “living with dignity.”

The Civil Campaign for Electoral Reform , a broad alliance for civil society associations issued a statement titled “The Orthodox Gathering Proposal Will Not Pass.”

“Today, Lebanon was dragged into the circle of danger and the threat of partitioning started to loom on the horizon, after the Lebanese went through 15 years of civil war,” the statement said.

The statement described the proposal as the “biggest farce,” and added: “The insolence of several political forces has reached the extent of blowing up the principle of coexistence, the unified state and the principles of national partnership for the purpose of securing a number of extra parliamentary seats.”

“Passing this law in parliament would be a dangerous step that has repercussions on Lebanon’s stability and civil peace, and should this law be put to a vote in parliament, all the civil, political and syndical forces that reject it will escalate protests to prevent taking the country into partitioning or a new civil war,” it added. 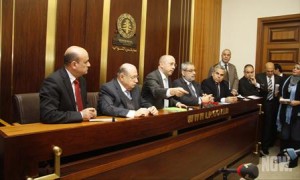 The proposal calls for dividing Lebanon into a single electoral district and allows each sect to vote for its own lawmakers only under a proportional representation system.

If this law passes in the parliament it will replace the current 1960 electoral law which was used in the 2013 elections.

Future Movement parliamentary bloc slammed on Monday the approval of the Orthodox draft electoral law by the parliamentary committee and called the adoption of such a law a “black day in Lebanon’s history”.

“Some MPs have abandoned Lebanon and its institutions today,” the bloc said in a statement released after the lawmakers’ weekly meeting. “It is a black day in Lebanon’s legislative history”.

“It is the best gift we can offer to the Israeli enemy,” the statement expressed.

The MPs restated their rejection of the draft law, confirming that they will continue to oppose it “with all available democratic means”: “There is still a chance to correct this mistake that will threaten Lebanon’s format and the country’s unique role in the region”.

Hopes for consensus between rival lawmakers on an electoral law were shattered on Tuesday after MPs from several blocs withdrew from the meeting of the joint parliamentary committees in protest after the adoption of the Orthodox Gathering proposal.

The proposal is supported by the four major Christian parties – the FPM, LF, Phalange and Marada but has been rejected by President Michel Suleiman, Premier Najib Mikati, MP Walid Jumblat, Future Movemnent and several other independent Christian opposition MPs.

“Today is the brightest day in Lebanon’s history because rights were returned to their owners without encroaching on the rights of others. The value of the votes of marginalized groups has been restored, that’s why we’re happy with this achievement,” Aoun told reporters after the weekly meeting of the Change and Reform in Rabiyeh.

“This law will restore parity and true democracy and will not lead to a conflict among sects. Those who have got used to encroaching on the rights of others are describing others as violators. We are willing to continue to build Lebanon together, but according to a reformist orientation and equal rights, not according to a provocative approach,” Aoun added.

Asked by reporters about his phone calls, Aoun said: “I thanked them for their role in securing the success of this law which might create new realities.”

“Those affected by the Orthodox Gathering law are speaking as if the LF and the Phalange Party are their followers. This is politics and alliances change. They might lose some seats to us and they don’t want us in power and that feverish wish is driving them crazy,” Aoun said, referring to al-Mustaqbal movement, Progressive Socialist Party leader MP Walid Jumblat and independent Christian MPs, who have rejected the Orthodox Gathering proposal and walked out of Tuesday’s session.

“They are insisting that the Orthodox Gathering proposal will not pass, but why will things be different than they were today? Walkouts will entail great responsibilities that no one can bear,” he added.

The approval of the controversial Orthodox electoral law proposal Tuesday has apparently deepened political divisions in the country and dented hopes for holding the June elections on time.

Speaker Nabih Berri and Interior Minister Marwan Charbel issued appeals for the rival political factions to reach a consensus on a new electoral law if the polls are to be held on time.

Charbel said the joint committees’ approval of the Orthodox Gathering’s electoral proposal was not sufficient to hold the parliamentary elections as scheduled. He ruled out holding the elections unless a consensus was reached on a new electoral law.

“No elections will be held in the absence of a consensus on a new electoral law,” Charbel said. “What happened in Parliament today [Tuesday] was meant to give [the parties] more time to search for a consensual solution to the electoral law problem. If no consensus was reached, there would be no elections.”

Berri’s and Charbel’s appeals came amid rising fears that the elections might not be held at all, given the sharp split over the Orthodox proposal that was approved by the joint committees.

Berri, apprehensive over the dire consequences of the split over an electoral law, appealed to the March 8 and March 14 parties to reach a consensus on a voting system to govern the elections.

Addressing the feuding parties, Berri said: “You have the 1960 law behind you and the Orthodox proposal in front of you. Therefore, you have no choice but to reach consensus.”

Berri is reportedly aiming at giving consensus a chance and for this reason he is not in a rush to call for a parliament vote on this law.

“I will take my time in order to hold consultations with all the parties with a view to securing a consensus on a new electoral law,” Berri said

Charbel said that if the Orthodox proposal won a majority of MPs’ votes in the general assembly, it would be challenged by lawmakers, a step that would subsequently lead to postponing the elections.

According to sources close to Baabda Palace President Michel Suleiman, who strongly opposed the Orthodox proposal, would challenge it if it was adopted by the Parliament. “President Suleiman rejected the Orthodox Gathering’s draft law because it contravenes the Constitution and enhances confessional and sectarian divisions,”The sources were quoted by local media as saying and adding:

“Therefore, the president will challenge the Orthodox proposal in the Constitutional Council if it is approved by Parliament’s general assembly.”

MP Akram Shehayeb who represented MP Walid Jumblatt’s PSP in the committee said he pulled out of the committees’ session due to his party’s “clear stance on the Orthodox law.”

“We see in the Orthodox proposal the shortest way to political violence in the country,” he said.