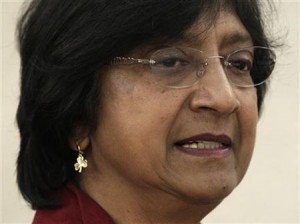 The death toll in Syria is likely approaching 70,000 – up almost 10,000 from the start of the year – and civilians are paying the price for the U.N. Security Council’s lack of action to end the conflict, the U.N. human rights chief said on Tuesday.

Navi Pillay, the U.N. high commissioner for human rights, repeated her call for the 15-member council to refer Syria to the International Criminal Court to send a message to both parties in the conflict that there will be consequences for their actions.

The death toll in Syria is “probably now approaching 70,000,” Pillay told a council debate on protection of civilians in armed conflict.

On January 2, Pillay said more than 60,000 people had been killed during the revolt against Syrian President Bashar al-Assad, which began nearly two years ago with peaceful protests but turned violent after Assad’s forces tried to crush the demonstrations.

“The lack of consensus on Syria and the resulting inaction has been disastrous and civilians on all sides have paid the price,” she said. “We will be judged against the tragedy that has unfolded before our eyes.”

World powers are divided on how to stop the escalating violence in Syria and the Security Council is unlikely to refer the matter to the International Criminal Court in The Hague, which is not an official U.N. body.

Permanent Security Council members Russia and China have acted as Syria’s protector on the council by repeatedly blocking Western efforts to take stronger U.N. action – such as sanctions – against the Syrian government to try to end the war.

Both sides to the Syrian conflict have been accused of committing atrocities but the United Nations says the government and its allies have been more culpable.

“Syria is self-destructing,” U.N. Secretary-General Ban Ki-moon told the Council on Foreign Relations on Monday. “After nearly two years, we no longer count days in hours, but in bodies. Another day, another 100, 200, 300 dead.”

“Fighting rages. Sectarian hatred is on the rise. The catalogue of war crimes is mounting,” he said. “The Security Council must no longer stand on the sidelines, deadlocked, silently witnessing the slaughter.”

More than 50 countries asked the Security Council last month to refer the Syrian crisis to the International Criminal Court, which prosecutes genocide and war crimes cases.

Syria is not a party to the Rome Statute, which set up the International Criminal Court, so the only way the court can investigate the situation is if it receives a referral from the Security Council. The council has previously referred conflicts in Libya and Darfur, Sudan, to the court.

“Their governments are an integral part of the creation, escalation and expansion of the crisis in my country whether through coercive unilateral sanctions imposed on the Syrian people or allowing for departure of their own citizens, fundamentalists and terrorists, to come to my country Syria,” he said.

The United States, the European Union and the Arab League have imposed various sanctions on Assad’s government.