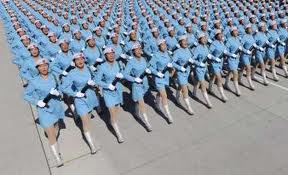 China surpassed the U.S. to become the world’s biggest trading nation last year as measured by the sum of exports and imports of goods, official figures from both countries show.

China’s growing influence in global commerce threatens to disrupt regional trading blocs as it becomes the most important commercial partner for some countries. Germany may export twice as much to China by the end of the decade as it does to France, estimated Goldman Sachs Group Inc.’s Jim O’Neill.

“For so many countries around the world, China is becoming rapidly the most important bilateral trade partner,” O’Neill, chairman of Goldman Sachs’s asset management division and the economist who bound Brazil to Russia, India and China to form the BRIC investing strategy, said in a telephone interview. “At this kind of pace by the end of the decade many European countries will be doing more individual trade with China than with bilateral partners in Europe.” 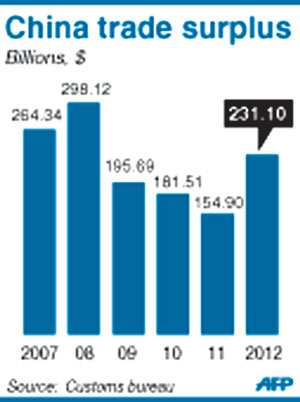 When taking into account services, U.S. total trade amounted to $4.93 trillion in 2012, according to the U.S. Bureau of Economic Analysis. The U.S. recorded a surplus in services of $195.3 billion last year and a goods deficit of more than $700 billion, according to BEA figures released Feb. 8. China’s 2012 trade surplus, measured in goods, totaled $231.1 billion.

“It is remarkable that an economy that is only a fraction of the size of the U.S. economy has a larger trading volume,”Nicholas Lardy, a senior fellow at the Peterson Institute for International Economics in Washington, said in an e-mail. The increase isn’t all the result of an undervalued yuan fueling an export boom, as Chinese imports have grown more rapidly than exports since 2007, he said.

The U.S. emerged as the preeminent trading power following World War II as it spearheaded the creation of the global trade and financial architecture. Protectionist policies in the 1930s had exacerbated the global economic depression. At the same time the U.K., the leading trading nation of the 19th century, began to dismantle its colonial empire.

China began focusing on trade and foreign investment to boost its economy after decades of isolation under Chairman Mao Zedong, who died in 1976. Economic growth averaged 9.9 percent a year from 1978 through 2012.

China became the world’s biggest exporter in 2009, while the U.S. remains the biggest importer, taking in $2.28 trillion in goods last year compared with China’s $1.82 trillion of imports. HSBC Holdings Plc forecast last year that China would overtake the U.S. as the top trading nation by 2016.

China was last considered the leading economy during the height of the Qing dynasty. The difference is that in the 18th century, the Qing Empire — unlike rising Britain — didn’t focus on trade. The Emperor Qianlong told King George III in a 1793 letter that “we possess all things. I set no value on objects strange or ingenious, and I have no use for your country’s manufactures.”

While China is the biggest energy user, has the world’s biggest new car market and the largest foreign currency reserves, a significant portion of China’s trade involves importing raw materials and parts to be assembled into finished products and re-exported, an activity that provides “only modest value added,” Eswar Prasad, a former International Monetary Fund official who is now a professor at Cornell University in Ithaca, New York, said in an e-mail.

Economists from banks including UBS AG and Australia & New Zealand Banking Group Ltd. recently expressed skepticism about China’s export data after the customs administration reported an unexpected 14.1 percent export gain in December. The General Administration of Customs defended the data last month, saying all statistics are based on actual customs declarations, and the Ministry of Commerce said the jump was caused by exporters who hurried shipments before a waiver of inspection fees expired at the end of the month.

The U.S.’s bilateral trade deficit with China, which peaked in 2012, could remain a flashpoint of tension between the two countries, Prasad said.

“This trade imbalance is not representative of the amount of goods actually produced in China and exported to the U.S., but this perspective tends to get lost amidst the heated political rhetoric in the U.S,” said Prasad.

According to O’Neill, the trade figures underscore the need to draw China further into the global financial and trading architecture that the U.S. helped create.

“One way or another we have to get China more involved in the global organizations of today and the future despite some of their own reluctance,” O’Neill said, mentioning China’s inclusion in the IMF’s Special Drawing Rights currency basket. “To not have China more symbolically and more importantly actually central to all these things is just increasingly silly.”