How Much Gold Does China Really Have? 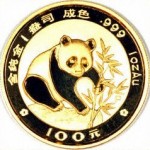 It’s amazing that no one is talking about this.

But no one, and I mean no one, in the mainstream is calling a spade a spade. China is hoarding gold at a rate never seen before – like modern day conquistadors. Only today, unlike in the time of the conquistadors, the blood trail is tough to follow, as are the shipfuls of gold.

It’s an egregious rake, though. And while the mainstream media fails to cover this huge story, we’ll do our best to figure out just how much gold China is holding…

It all comes down to a little Chinese math.

Remember, the last “official” announcement detailing China’s gold holdings was in 2009 – ringing in a total of 1,054 tonnes. Compared to their previous official holding, announced six years prior, the new total represented a dramatic 75% increase in Chinese gold holdings. 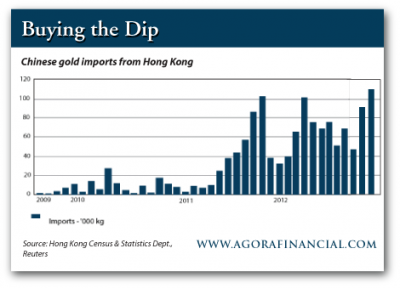 Much time has passed since the latest official announcement – and China’s gold holdings have surely risen higher. Indeed, a year ago, when we touched base on this topic, we ascertained that China was likely holding 3,300 tonnes of gold – that’s about three times the current “official” holdings.

Flash forward to today and the strategic Middle Kingdom is surely holding even more gold. Just take a look at their import patterns over the last 12 months…

As you can see, and likely know if you’re an Agora Financial reader, imports via Hong Kong have been off the charts lately. Indeed, last year set a record for imports to mainland china.

But that’s only part of the story. This morning I took the time to add up all the imports along with production stats to give us a clear idea of just how much gold China is holding behind the curtain.

Starting at the time of China’s last official announcement, we’d need to add another 2,873 tonnes to China’s “official” holdings, just to account for imports and domestic production alone. That would put China’s current “known” holdings at 3,927 – well above Germany as the second largest gold holding nation in the world.

And do you think Germany’s ears are starting to burn? You betcha! Why do you think we saw that news earlier this year that Germany is auditing its gold holdings and repatriating some of its gold held out of country? It’s all about the Chinese math!

But here’s the kicker.

When you start adding up the stealthy, hard-to-track sources of gold – black market gold from Africa and South America (and maybe Iran) exports, global gold mining from semi-national Chinese firms or buyouts, and the idea that China is urging their own citizens to hoard gold – you’ll notice that China’s gold hoard is closer to 7,000 tonnes, or more! 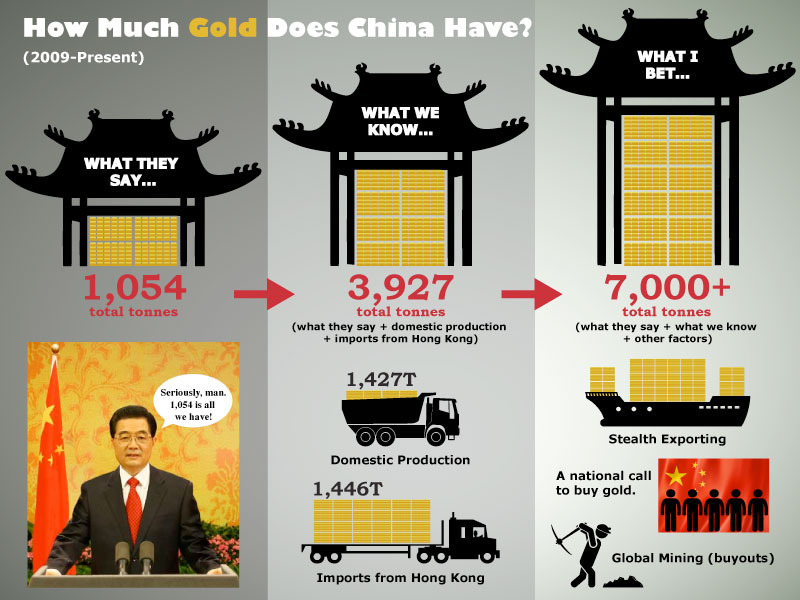 By my calculations China could be sitting on more than 7,000 tonnes of gold, today. A lot of which comes from “stealthy” acquisitions that the mainstream won’t dare talk about: stealthy exporting, potential nationalization of the citizens gold, and gold transfers from mining buyouts, just to name a few.

Think of it this way. Right now the U.S. is tightening sanctions on Iranian oil exports.

There’s a huge thrust by the U.S. to curb monetary flows into Iran – so the U.S. has more than a few eggheads figuring this out, too. But even with all of the press coverage and government collaboration, do you really think Iranian oil exports are grinding to a halt?

I don’t. Sure the “official” exports are heading lower – but on the back end of that there is a massive amount of Iranian oil hitting the market.

Now let’s switch back to our discussion on China. There aren’t any sanctions on China’s gold imports, nor do we have any government agencies or global-collaborations attempting to stop China’s gold moves.

That said, if Iran can export oil when we don’t want them to, just imagine what kind of show China is putting on behind the scenes without a peep from the U.S. government! The amount of under-the-radar gold coming from Africa and South America has the potential to be enormous.

Frankly, name any country in Africa — with gold in the ground — and I bet you there are Chinese nationals on the ground digging or, at minimum, setting the ground work for black-market trade agreements.

On that end, you could fit enough bullion into a dingy to shift the global market for gold. But I’ll be the first to tell you the Chinese aren’t showing up to Africa’s gold-holding nations in a dingy – instead, they’re stopping by with cargo ships. Lots of em.

Ha, and here’s another little anecdote for you…

A few years back I sold my old car. In the process I had a lot of “colorful” characters show up at my house. They’d try to lowball me or pose a “trade” for my car (man, the kind of people that you find on the internet these days!) But when it was all said and done I ended up selling my beat-up, 13-year old car to the highest bidder. He was happy to pay for it, too.

After we did some paperwork I asked him if it was for him or his family, he casually said “nope.”

“I’ll be shipping this car via cargo ship to Africa, there’s a huge market for old cars there and this is one of the top selling models” he said. Forget selling the old car to a high-schooler, my car was headed overseas!

What’s this got to do with the whole China gold debate?

Well, believe it or not the developing world in Africa wants to keep developing. Whether they get old cars from the U.S. or cheap goods from China they are willing to pay good money (or good gold) for imports.

And China is at no lack for tradable merchandise – just check your local dollar store.

I’m shaking my head as I type right now. Just imagine a cargo ship filled with what’s essentially five, dollar stores-worth of merchandise — plastic soccer balls, wanna-be Barbie dolls, cheap tool sets, you name it. When that ship shows up on the shores of an emerging African nation and empties its cargo (to the happy locals), there’s NO WAY that boat is going back to China empty. More and more I bet it’s filled up with local resources that China craves – one of which is surely GOLD.

So you see, China is getting far more gold than it’s leading on – I bet there are thousands of tonnes that are unaccounted for. Heck, officially China says it hasn’t added an ounce of gold to its holdings for almost four years! That’s laughable. And it’s also profitable to those that see the writing on the wall.

It’s like the annoying guy at the poker table that hides his casino chips in his lap, waiting to pounce. But unlike a game of poker, the stakes are much higher in the global currency market.

Better start studying your Chinese math. After all, how much gold you have?