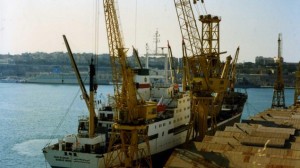 Yemen’s national security chief Ali Hassan al-Ahmedi accused Iran on Saturday of “damaging Yemen” as the interior ministry said it was pursuing a probe into an Iran-linked arms shipment which was seized last month.

“Such a shipment cannot be made by traders or smugglers… Only an official power stands behind it,” Ahmedi told reporters in Sanaa.

“We have repeatedly urged our brothers in Iran to reassess their stances towards Yemen. They had always denied any interference, but this shipment sadly affirms that they insist on damaging Yemen,” Ahmedi said.

“Yemen will take measures or preserve its right to defend its citizens and its sovereignty,” he said.

The Yemeni coastguard, in coordination with the U.S. navy, on January 23 intercepted in the Arabian Sea a ship carrying rockets and explosives which the Sanaa authorities say came from Iran. Tehran denies any involvement.

Interior Minister Abdelqader Qahtan said in a statement on Saturday that the “arms and explosives shipment seized in Yemen’s territorial waters on January 23 were very dangerous due to the amounts of explosives that would have killed millions of Yemenis if placed in residential areas.”

The ministry said the eight-member crew of the Jihan II were still being interrogated by security services who are also investigating “other shipments from the same source which entered the country” in May last year.

The ministry said the Jihan II was carrying “40 tonnes of arms, shells and explosives.”

A security official last week said the vessel came from Iran and that the arms “were destined for the Huthi rebels in Saada,” the stronghold of Shiite fighters in northern Yemen.

Yemen has officially requested the help of the UN Security Council investigating the Iranian weapon cargo that was seized in the Yemeni territorial water.

Yemen permanent representative to the UN Security Council submitted a letter from the Yemeni government to the UN committee of Iran Sanctions.

Yemeni politicians repeatedly accuse Iran of supporting the Houthi group with funds and weapons and seeking to create a proxy group in Yemen to make up fr the possible loss of the Al-Assad regime in Syria.