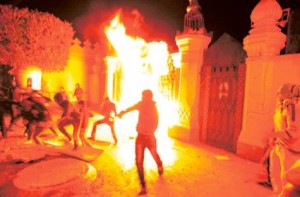 An Egyptian court on Saturday ordered the video-sharing website YouTube to be blocked in the country for a month after the site declined to remove an American-made video clip that was deemed insulting to Islam.

The decision to temporarily block the site comes five months after anger over the short video, titled “Innocence of Muslims,” fueled protests in a number of countries. In Cairo, where protests first broke out on Sept. 11, thousands of mostly Islamist activists rallied in front of the heavily guarded U.S. Embassy, and a handful managed to breach the mission’s walls and pull down the American flag.

It wasn’t immediately clear on Saturday whether, how or when the ruling would actually take effect. The website, which is owned by Google Inc. was working in Egypt on Saturday.

Young Egyptian activists who rely heavily on YouTube to spread videos of police brutality, political satire and calls for protest mostly jeered at the Egyptian court ruling, calling it yet another example of what they say is scattered, faulty decision-making that has complicated Egypt’s two-year transition to democracy.

“It’s silly from a technical point of view,” said Wael Eskandar, a pro-democracy activist and trained computer programmer. He said it was unclear how the government would carry out the ruling. “It’s like someone saying I sentence you to go to the moon but you have to find a space shuttle.”

The ruling, by the seventh district administrative court, can be appealed. The Egyptian government has also simply failed to enforce some similar rulings in the past.

In November, an Egyptian court convicted in absentia seven Egyptian Coptic Christians and a Florida-based American pastor and sentenced them to death on charges linked to the video.

Photo: Protesters throw fire bombs and stones at the presidential palace during a demonstration in Cairo on Friday. Egypt has witnessed a fresh cycle of violence over the past two weeks since the second anniversary of the 2011 uprising that deposed Hosni Mubarak. An Egyptian court on Saturday ordered the video-sharing website YouTube to be blocked in the country for a month.