Official : Everyone should save Syria from falling into hell 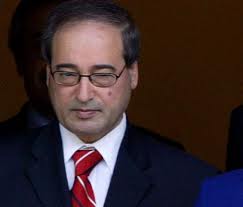 The regime of President Bashar Assad has shown no signs of giving in even as opposition fighters have advanced to the outskirts of Damascus. In an interview with Susanne Koelbl  of  SPIEGEL ONLINE, Deputy Foreign Minister Faisal al Mekdad blames the West for the violence and says Assad has satisfied all opposition demands.

SPIEGEL ONLINE: Mr. Minister, you have just come back from visits to Iran and Russia. Has the Russian government offered Syrian President Bashar Assad asylum in Moscow?

Mekdad: Why should they? The subject was never addressed. We will prevail. The exile question is just an element of psychological warfare. President Assad has said that he was born here and he will die here, whenever that might be. SPIEGEL ONLINE: Even your ally, Russian Deputy Foreign Minister Mikhail Bogdanov, remarked recently that the Syrian government is losing control over more and more territory. What is still giving you hope?

Mekdad: We are optimists and strong enough to overcome this challenge, even against the attack of an alliance of Western countries and Gulf states which claims to be promoting democracy and freedom. Until four months ago, Aleppo was one of the safest cities in the world. So I congratulate the advocates for human rights and democracy on the destruction of the Umayyad Mosque, the historic souks and the old town of Aleppo. On the other hand, we value the Russian position.

SPIEGEL ONLINE: Russia is also pursuing its own interests. Tartus is the only Russian port on the Mediterranean, 50,000 Russians live in Syria and the arms trade between the two countries is significant. A good deal of the destruction can be attributed to the regime itself.

Mekdad: I can only warn the Europeans not to go on supporting these groups. These people are not just fighting against Syria, but against the order of all civilized nations, including your country in the future.

SPIEGEL ONLINE: The Syrian government believes in an international conspiracy. How would the Western states and their allies benefit from the fall of Assad’s regime?

Mekdad: Israel and the US would be the winners. Were Syria divided and placed under international control, the Israeli-Arab conflict would be forgotten. Israel could live in peace and keep the Golan Heights and all of Jerusalem and continue to bully the Palestinians. We are the only one of Israel’s neighbors that still represents the Arab position.

SPIEGEL ONLINE: This revolution was originally a popular uprising against an oppressive state. Many people have reported that they were arrested for demonstrating peacefully and nearly killed in regime torture chambers.

Mekdad: Why don’t you ask other Syrians for their views? These people do not represent the majority. It is striking that the president has responded to the demands of the demonstrators. There’s a new constitution, the supremacy of the Baath Party has been ended, parties may be established, elections for a new parliament were carried out, new laws concerning demonstrations were passed. All that is completely ignored, none of it recognized abroad. On the contrary, it was after Assad changed the laws that the escalation really began. What more do these so-called revolutionaries actually want?

SPIEGEL ONLINE: Apparently it was too little, too late. The people don’t believe in you anymore.

Mekdad: This uprising is for the most part an externally organized, externally funded uprising. The militant groups receive billions of dollars from certain Gulf states. It is a global, multi-billion-dollar mercenary business. President Assad has heard the political demands of his people and he wants to reconcile with them, and indeed with everyone, as he announced in his speech on Jan. 6. If the fighting and the outside support are brought to an end and everyone sits around a table, then we can begin to shape the future of the country.

SPIEGEL ONLINE: Foreign powers and the opposition were unimpressed by the president’s speech. The fight is for his political end. How can he be the one to invite the parties involved to a round table?

Mekdad: It is not for other countries to decide on the Syrian president. Leave that to the Syrian people and the voting booths. We will not allow anyone to undermine the country’s sovereignty. If the president were to give up, there would be nothing here but death and destruction. President Assad is ready to do anything to prevent that, no matter what the cost.

SPIEGEL ONLINE: For a long time, Syria had a good relationship with Turkey and at least not an entirely bad one with Saudi Arabia. Why are you now such a bitter enemy of both countries?

Mekdad: We have long tried to maintain good relations, but we were forced to realize that the Muslim Brother Recep Tayyip Erdogan was pursuing a completely different plan. Namely, he wanted to legally bring the Muslim Brotherhood back to Syria with help from Al-Qaida, the Al-Nusra Front and other extremist religious groups in order to establish a powerful network from Egypt to Tunisia, Libya, Syria and Iraq — a new Ottoman Empire. Because they now shelter all types of armed groups — and opened the border with Syria for them — Erdogan and his foreign minister, Ahmet Davutoglu, are personally responsible for the deaths of thousands of Syrians. Why has Turkey not been reprimanded by the UN?

SPIEGEL ONLINE: What is the problem between Syria and Saudi Arabia?

Mekdad: Saudi Arabia is under immense American pressure and is therefore supporting certain religious groups that are fighting here. At the same time, the country understands very well that in doing this, it’s working against its own interests. Therefore they should free themselves as quickly as possible from American dependency.

SPIEGEL ONLINE: Why would the Americans want Syria succumb to violence and destruction?

Mekdad: The protection of Israel is the only explanation. It began with sanctions, and now it’s come to this. The so-called friends of Syria, who meet in Doha, Istanbul and Marrakesh, are actually the enemies of Syria and under the command of American ambassadors. But now the matter has gotten out of control for them. At least now they’ve put the Al-Nusra Front on the list of terrorist organizations, but unfortunately not the many others who are here indiscriminately killing my countrymen every day.

SPIEGEL ONLINE: Is it true, as Syrian propaganda television reports daily, that the armed opposition consists entirely of terrorists?

Mekdad: There are all sorts of groups, including many that are simply misguided. And of course we, the government, have also made mistakes in the socio-economic sphere. Nevertheless, the armed opposition wanted the escalation from the beginning. They took that position from day one. The provocateurs hid among the peaceful demonstrators and shot down police and protesters alike.

SPIEGEL ONLINE: Those who took part in early demonstrations have uniformly reported that the regime cracked down vigorously from the beginning. Even doctors and nurses who cared for injured protestors were arrested and disappeared into the dungeons of the notorious Mukhabarat.

Mekdad: That is war propaganda, just like the alleged massacre in Homs that government forces are said to have committed the day before the UN Security Council was meeting about Syria. We eventually arrested the perpetrators. They slaughtered 60 people with knives — led by a member of the Muslim Brotherhood who instigated the attack, precisely one day before the meeting.

SPIEGEL ONLINE: The rebels have now advanced to within 600 meters of the Damascus old town. Day and night the people of Damascus hear the pounding of grenades and the fire of Kalashnikovs. How long can you keep this up?

Mekdad: We can hold out as long as the other side wants to go on.

SPIEGEL ONLINE: The UN Special Envoy Lakhdar Brahimi said during his last visit to Damascus that Syria now has the choice between the political process and hell.

Mekdad: We want the political process …

SPIEGEL ONLINE: … but only under your conditions…

Mekdad: … and everyone involved should save Syria from falling into hell.