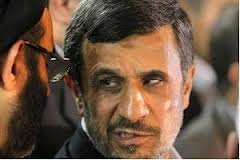 Iran’s foreign ministry on Wednesday downplayed an incident in Cairo in which a protester tried to throw a shoe at President Mahmoud Ahmadinejad, saying it did not indicate Egypt’s official stance towards Tehran.

“What is important to us is the behaviour of Egyptian officials and the nation, who respect the Islamic republic as a major power,” the ISNA news agency quoted ministry spokesman Ramin Mehmanparast as saying.

On Tuesday evening, Iranian President Ahmadinejad was booed by a man who also tried to throw his shoe at him as he left Cairo’s Al-Hussein mosque following prayers.

The man, identified as a “Syrian opposition” member by ISNA, also pushed a bodyguard but he was quickly dealt with and Ahmadinejad was able to enter his car.

At the scene, four youths waved placards scrawled with slogans against Iran over its support for Syrian President Bashar al-Assad’s regime in its 22-month conflict with rebels.

“O Ahmadinejad, do not think the Syrian blood is in vain. We will take revenge on the Shiites,” read one of the posters.

Ahmadinejad, unfazed by the incident, termed it a “minor issue”.

Talking to Egyptian media late Tuesday, the president said: “There might be some opposition in both countries who disturb the atmosphere… by prejudice and some actions,” the official IRNA news agency reported.

Ahmadinejad, the first Iranian president to visit Cairo in more than 30 years, was given a red-carpet welcome by Islamist President Mohamed Morsi when he arrived on Tuesday.

But he faced criticism by Egypt’s top Sunni cleric who asked him not to interfere in the affairs of Gulf states.

Ahmed al-Tayyeb, the grand imam of Cairo’s Al-Azhar, also urged Ahmadinejad to uphold the rights of his Shiite-ruled country’s Sunni minority, denouncing what he described as the “spread of Shiism in Sunni lands”.

Mehmanparast on Wednesday considered Ahmadinejad’s three-day visit as an “effective” step forward in bilateral ties and said it created “stability in the region”.

Ahmadinejad’s visit comes amid thawing relations between Egypt and Iran, which severed ties with Cairo in 1980 in protest at a peace treaty signed the previous year between Israel and Egypt.

Iran has been reaching out to Egypt since Islamists came to power in the wake of the 2011 revolution that ousted veteran president Hosni Mubarak, a staunch critic of Tehran.

Morsi, who hails from the powerful Sunni Muslim Brotherhood, has attended a Non-Aligned Summit in Iran, becoming the first Egyptian president to travel to Tehran since the 1979 Islamic revolution.