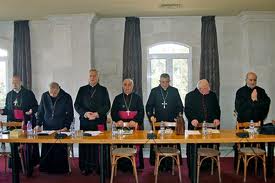 The Maronite’s Bishop council said on Wednesday that civil marriage can coexist with religious marriage but cannot replace it.

According to the bishops, the issue of civil marriage has two aspects, a religious one and another which is constitutional.

“The constitution advocates the introduction of civil marriage in Lebanon,” they said but “Those who marry in a civil union must complement it with a religious ceremony.”

The civil marriage issue gained momentum soon after Kholoud Sukkariyah and Nidal Darwish challenged the sectarian personal status code in Lebanon and became the first couple to hold a civil marriage in lebanon. Since then another couple Shaza Khalil and Tony Dagher followed their lead and decided to tie the knot in a civil union.

The bishops also voiced concern over the rising number of crimes in the country and “the expression of hostile feelings towards the security forces, including the Army.”

“Citizens should respect the Army and security forces as they are the only legitimate institutions entitled to provide security and protection to them,” said the bishops.

The bishops also reiterated their call for a new parliamentary electoral law that would secure fair representation to both Muslims and Christians.