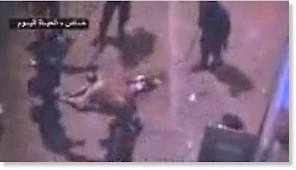 A man who was beaten and dragged across the ground naked by Egyptian riot police during a demonstration on Friday was shown on state television blaming the incident on demonstrators.

A video of Hamada Saber, 48, being beaten with truncheons by helmeted police has infuriated the opposition, which accuses President Mohamed Mursi of ordering a harsh crackdown on protests two years after the uprising that toppled autocrat Hosni Mubarak.

Mursi’s government has announced an investigation into the incident, which came at the end of eight days of violent protests that saw nearly 60 people killed, the deadliest unrest of his seven months in office.

State television aired overnight a recording of Saber, lying on bed in a police hospital, giving his account of the incident, in which he blamed protesters for stripping and robbing him.

It was not clear how his account could be reconciled with the widely seen footage, which clearly showed police beating him with truncheons and dragging him naked across a road.

Saber said he had seen a crowd running and then felt himself shot in the leg.

“I fell over, I failed to stand up again, then they surrounded me in a circle and attacked me,” he said. The interviewer asked if he was referring to the demonstrators, and he answered: “Yes I am. They took my clothes off, maybe they were looking for money in my pockets. Then someone among them shouted: ‘He is not a soldier. He is not a soldier, he is an old man and you are going to kill him.’

“The soldiers ran towards me. I was afraid of them, but they were saying, ‘We will not beat you’. I swear to God this is what happened. I kept on running. They said again: ‘Do not be afraid.’ I kept running away and they said, ‘We are exhausted because of you’.”

Egypt’s prosecutors’ office has released a statement saying Saber denied that police had hit him. That statement was received angrily by the opposition which suspects the authorities of intimidating him to exonerate the police.

“That a citizen be dragged in a public space is a crime against humanity. That he be forced to amend his testimony before the Public Prosecution is tyranny. It has dire consequences for justice,” Nasser Amin, a prominent lawyer and campaigner for judicial independence said on Twitter.