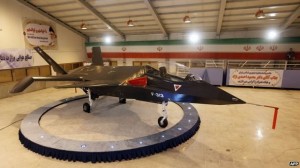 The single-seat Qaher F313 (Dominant F313) is the latest design produced by Iran’s military since it launched the Azarakhsh (Lightning), in 2007.

President Mahmoud Ahmedinejad said it had “almost all the positive features” of the world’s most sophisticated jets.

He said the “development of the Iranian nation’s military power is… for deterrence and defensive purposes”.

In an unveiling ceremony inside a Tehran hangar broadcast on State TV on Saturday, Mr Ahmadinejad said he ranked the aircraft as “among the most advanced fighter jets in the world”.

Pictures of the jet were released by state television, showing a steely grey jet that Iran’s Defence Minister Ahmad Vahidi said was built with “advanced materials” and had a very low radar signature.

The ceremony was timed to coincide with the 34th anniversary of the 1979 revolution, which replaced the US-backed shah with an Islamic regime.

Iran this week claimed to have successfully sent a monkey into space in a Pishgam rocket, which reached an altitude of some 120km (75 miles) for a sub-orbital flight.

Western nations responded by expressing concern that Iran’s space programme was being used to develop long-range missiles that could potentially be used to carry nuclear warheads.

Iran denies it is seeking to develop nuclear weapons and insists its nuclear programme is solely for peaceful purposes.

The Qaher F313 looks like a cheap copy of the American F22 and its capabilities are unknown. State TV did not even show its take-off or landing. Iran is in dire need of planes to boost its ageing fleet. The 1980-1988 Iraq-Iran war left a big dent in Iran’s air force arsenal of US-supplied planes.

Damaged ones were used for spare parts and some of them (mostly Northrop F-5s) were turned into a new generation of planes like the Azarakhsh. Their capabilities are also unknown as they have not seen any real action.

Iran has been under tight sanctions since its war with Iraq and has not been allowed to obtain new hardware or spare parts for its old fleet. Buying Russian or Chinese jet fighters is not a ready option for Iran due to new sanctions imposed over its controversial nuclear programme.

So the big challenge for Iranian military planners remains – having an air force that it can maintain and support locally, as buying parts on black market has been very costly.