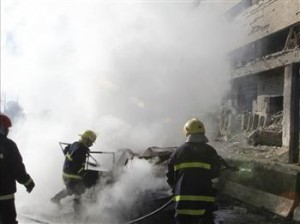 At least 33 people were killed in the Iraqi city of Kirkuk on Sunday when a suicide bomber detonated a truck packed with explosives outside a police headquarters and gunmen disguised as officers tried to storm the compound.

The blast was the third major attack in weeks in or near the multiethnic city of Arabs, Kurds and Turkmen, at the heart of a dispute between Iraq’s central government and the autonomous Kurdistan region.

Police said the bomber triggered the huge blast near a side entrance to the police building, demolishing part of a government office nearby.

“A suicide bomber driving a vehicle packed with explosives hit the entrance of the headquarters and after the blast gunmen in explosive vests attacked with AK47s and grenades, but the guards killed them,” a police official said.

Guards and emergency workers dragged bloodied survivors onto stretchers amid the wreckage of the blast, which left a large crater in the street.

Police said 33 were killed, including 12 employees at the government office. But a health official said only 16 bodies were at a hospital morgue and more than 90 were wounded.

The attack comes as insurgents linked to al Qaeda try to inflame sectarian conflict in Iraq, where a power-sharing government split among Shi’ite majority, Sunni and ethnic Kurds has been in crisis since the last U.S. troops left a year ago.

Shi’ite Prime Minister Nuri al-Maliki is facing mass protests from Sunni Muslims in western provinces calling for him to step down, complaining of marginalization since the fall of Saddam Hussein.

In the north, the premier is also caught in a tense standoff with the country’s autonomous Kurdish enclave over control of oil wealth and land along the so-called “disputed territories” where both regions claim control.

Kirkuk, 170 km (100 miles) north of the capital, is at the heart of the dispute. Last year Baghdad and the Kurdistan regional government sent rival forces to towns close to the disputed territories.

Al Qaeda’s local wing, Islamic State of Iraq, though weakened after years of war with American troops, has benefited from the inflow of Sunni Islamists and arms into Syria where Sunni rebels are fighting President Bashar al-Assad.

Suicide bomb attacks are the hallmark of the Iraqi al Qaeda wing, and the group claimed responsibility for a suicide bombing that killed a Sunni lawmaker last month in Falluja.

But Kirkuk has also been home to the Naqshbandi army or JRTN, one of several insurgent groups made up of former soldiers and members of Saddam’s outlawed Baath party.

Iraqi Arabs, Kurdistan’s government and Kirkuk’s minority Turkmen all lay claim to the city, known to some as the “Jerusalem of the Kurds” – a reference to its historically disputed status.

Last month a suicide bomber disguised as a mourner killed at least 26 at a funeral at a Shi’ite mosque in the nearby city of Tuz Khurmato, and days earlier a suicide bomber driving a truck killed 25 in an attack on a political party office in Kirkuk.

The level of violence in Iraq is lower than at the height of sectarian slaughter in 2006-2007, when tens of thousands died. But more than 4,400 people were killed last year in attacks and bombings, the first increase in deaths in three years.