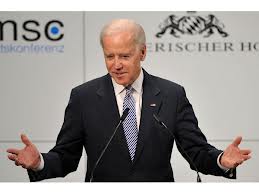 The United States is ready to hold direct talks with Iran if it is serious about negotiations, Vice President Joe Biden said on Saturday, backing bilateral contacts that many see as crucial to easing an international dispute over Tehran’s nuclear program.

Speaking at a security conference in Munich, Biden said Iran – which says it is enriching uranium for peaceful energy only – now faced “the most robust sanctions in history” meant to ensure it does not use its program to develop nuclear weapons.

“But we have also made clear that Iran’s leaders need not sentence their people to economic deprivation and international isolation,” Biden said. “There is still time, there is still space for diplomacy backed by pressure to succeed. The ball is in the government of Iran’s court.”

To date, fitful talks on Iran’s nuclear program have been between Tehran and the EU’s top diplomat representing six world powers including Washington. But analysts have suggested that with his re-election behind him, President Barack Obama might have more leeway to take on direct negotiations with Iran.

That makes the year ahead critical for chances of overcoming a stand-off which, if left to fester further, could see Iran approach a nuclear weapons capability and possibly provoking military action by Israel that could inflame the Middle East.

Progress on Iran would also help ease regional tensions as the United States prepares to pull most combat troops out of Iran’s neighbor Afghanistan by the end of 2014.

Asked whether Washington might consider direct talks with Iran to smooth the process, Biden said, “When the Iranian leadership, Supreme Leader (Ayatollah Ali Khamenei), is serious.

“We have made it clear at the outset that we would be prepared to meet bilaterally with the Iranian leadership, we would not make it a secret that we were doing that, we would let our partners know if that occasion presented itself.

“That offer stands, but it must be real and tangible and there has to be an agenda that they are prepared to speak to. We are not just prepared to do it for the exercise.”

Negotiations with Iran have so far been overseen by European Union foreign policy chief Catherine Ashton on behalf of France, Britain, Germany, China, Russia and the United States. But they have made scant headway, raising fears Iran is simply playing for time while it develops its nuclear know-how.

Ashton has asked Iran to hold a round of talks this month and on Friday called on Tehran to abandon plans to install and operate advanced centrifuges that would speed up its ability to enrich uranium – potentially making it easier for it to produce the highly enriched uranium needed for nuclear weapons.

Many believe no deal is possible without a U.S.-Iranian thaw, requiring direct talks addressing myriad sources of mutual mistrust and hostility lingering since Iran’s 1979 Islamic Revolution and the hostage crisis at the U.S. embassy in Tehran.

Iran has avoided direct, public talks with the United States, though some suggest Tehran would eventually welcome an opportunity to end its international isolation.

With Iran holding its own presidential elections in June, hopes of progress before then are limited.

The United States and its allies, however, do not have an indefinite amount of time to negotiate. Notwithstanding the current stalemate, Iran’s nuclear program is advancing and an international consensus on sanctions may be hard to maintain.

Israel, which describes the prospect of Iran being able to weaponise enriched uranium as an existential threat, has made clear it would be ready to bomb the nuclear sites of its arch-enemy to prevent that outcome. The United States has also said it would not rule out the use of military force.

Speaking at the Munich conference, German Foreign Minister Guido Westerwelle said that “2013 is the decisive year on Iran, especially for political reasons.

“We had elections in the United States and Israel, we will have elections in June in Iran; we see increasing capabilities especially with the issue of enrichment – let us be very frank, we did not have progress in the last 12 months, so it is obvious that we have to use this year..”

Russia, which has been impatient with decades of U.S. hostility to Tehran since its 1979 Islamic Revolution but backed U.N. Security Council sanctions since 2006, repeated on Saturday the need to find a diplomatic solution.

“Iran must know the overall game plan, it must see what is in it for it in this process. We need to convince Iran that this is not about regime change … this mistrust must be overcome,” Foreign Minister Sergei Lavrov told the conference.

“If we want to reach this goal, it would be wrong to discuss all these military options and possibilities. It is now important to focus our whole attention, all our effort for a diplomatic and political solution.”

This would have to include a relief from sanctions as well as recognition of Iran’s right to enrich uranium to the lower levels needed for civilian nuclear fuel, security analysts say.