US Ambassador to Lebanon Maura Connelly met on Thursday with Lebanese President Michel Suleiman and Prime Minister Najib Mikati to discuss the bilateral relations and assistance for refugees as well as the political and security situation in Lebanon and regional events .

“In both meetings, the ambassador discussed bilateral relations and assistance for refugees as well as the political and security situation in Lebanon and regional events,” a statement released on Thursday by the US embassy stated.

The statement added that the US envoy renewed her country’s commitment to a stable, sovereign, and independent Lebanon. 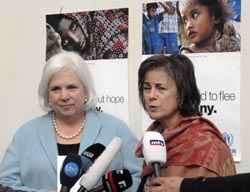 Also on Thursday Connelly visited the UNHCR registration center in Beirut during which she underscored President Barack Obama’s recent announcement of pledging $29 million in humanitarian assistance for Lebanon to support the Syrian refugees.

During her visit, Connelly “met with UNHCR Country Representative Ninette Kelley and with Syrian families who have sought protection in Lebanon from the continuing violence in Syria,” said a U.S. embassy statement.

She underscored Obama’s announcement on Tuesday of an an extra $155 million, including about $29 million for Lebanon, to aid refugees fleeing what he said was “barbarism” propagated by the government of President Bashar Assad.

The announcement takes U.S. humanitarian help to Syrians to $365 million of which $51 million supports assistance efforts for Syrian and Palestinian refugees in Lebanon, the statement said.

Connelly lauded the Lebanese government and the people for hosting and supporting some 230,000 Syrian refugees who have fled the violence in their country.

The statement also said that the U.S. remains committed to supporting Lebanon’s efforts in conjunction with U.N. agencies and non-governmental organizations to provide assistance to the displaced.

Lebanon is facing difficulties dealing with the increasingly high number of refugees fleeing Syria’s violent uprising against President Bashar al-Assad’s regime, which has killed more than 60,000 people since its outbreak in March 2011.

President Suleiman said on Wednesday that Lebanon was determined to keep the border open to Syrian refugees .