‘Dozens of bodies’ of executed Syrians found in Aleppo 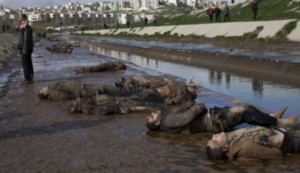 The bodies of dozens of young men, all apparently summarily executed, have been found in the northern Syrian city of Aleppo, rebels and activists say.

At least 65 bodies were found on the banks of the Quwaiq river in the western district of Bustan al-Qasr, the UK-based Syrian Observatory for Human Rights (SOHR) reported.

Most had their hands tied behind their backs and gunshot wounds to the head.