Siniora: No proportionality in presence of Hezbollah’s arms 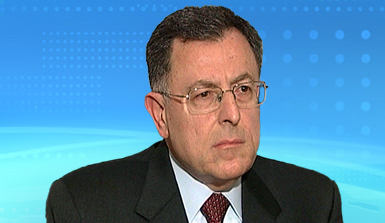 Former Prime Minister and current Future Movement parliamentary bloc leader MP Fouad Siniora said during a press conference that it is impossible to implement a proportional representation type electoral law in the presence of Hezbollah’s arms.

“It is impossible to implement proportionality in the presence of Hezbollah’s arms,” he was quoted as saying

Siniora , who held his press conference in Hlaliyyeh, Sidon was responding to the speech of Hezbollah chief Sayyed Hassan Nasrallah.

Siniora also reiterated his rejection of the so-called Orthodox Gathering proposal and said his bloc will soon present a comprehensive proposal that will ease the fears of the Christians and others and preserve coexistence.

“The bloc will soon make a comprehensive proposal that resolves the fears of Christians and others in a way that it preserves coexistence,” Siniora said.

Siniora stressed that elections should be held on time based on a law that keeps Lebanon away from dangers.

During his speech last Friday Nasrallah was quoted as saying:

“We had reservations initially about the proposed Orthodox electoral law and we in fact initially rejected it but our allies convinced us later and we now accept it.” He added:

“We prefer the law that was adopted by the cabinet . We also prefer the one electoral district for the whole country and we have accepted the law based on 13 districts even though this may not be to our advantage and may turn us to a minority ”.

The subcommittee charged with agreeing on an electoral has met several times to discuss the following proposed draft-laws: