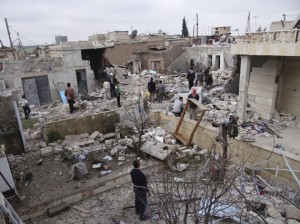 The Regime warplanes launched a wave of deadly raids across Syria on Saturday, including one that killed eight children, a watchdog said, as NATO declared Patriot missiles are now active on the Turkish border.

The strikes targeted areas of Aleppo province, which borders Turkey, as well as nearby Raqa province, Daraa in the south, Damascus’s Jobar district and Eastern Ghuta on the capital’s outskirts, said the Syrian Observatory for Human Rights.

In the deadliest raid on the city of Manbij, in the northern province of Aleppo, one air strike killed 16 people, half of them children, the Observatory reported from its sources on the ground.

Video footage posted on the Internet by activists opposed to President Bashar al-Assad’s regime showed harrowing scenes, as dozens of people rushed to rescue those trapped in rubble.

Grief-stricken men and women wailed and screamed as they scrambled away from the site of the attack carrying children, some of whom were covered in blood.

“Bashar is a dog! Bashar is a dog!” a young man in glasses shouted at the camera, which panned to show incinerated cars, massive trucks overturned and an entire neighbourhood covered in debris and dust.

Crowds of teenagers stared in shock at destroyed apartment buildings in the footage, whose authenticity could not be immediately verified.

Another seven people died in strikes on Aazaz, only seven kilometres south of Turkey, said the Observatory.

The watchdog, which relies on a network of activists, medics and lawyers on the ground for its information, said 83 people were killed nationwide so far on Saturday — 47 of them civilians.

The UN says the 22-month conflict has killed more than 60,000 people, while also estimating that the number of refugees in neighbouring countries will double to 1.1 million by June if the bloodshed continues.

In northern neighbour Turkey, NATO said one of six batteries of Patriot missiles deployed to protect against a spillover of the conflict went into operation on Saturday.

The battery, provided by The Netherlands, would “help to protect the (southern) city and people of Adana against missile threats,” it said, adding the other five batteries should be ready in the coming days.

Ankara and NATO have stressed the deployment is for defensive purposes only, while Damascus and its ally Moscow have criticised the measure. The US-made missiles can take out cruise and ballistic missiles, as well as aircraft.

A Syrian deputy prime minister said meanwhile that Russia, one of Assad’s last supporters, is still supplying weapons to Damascus under contracts signed long ago.

“Syria has always received and today is still receiving (weapons from Russia). We have agreements signed before the conflict and Russia is fulfilling its obligations,” Qadri Jamil told a Moscow radio station without specifying the kinds of weapons.

Elsewhere on the ground in Syria, the violence raged unabated between outgunned rebels and Assad loyalists.

The Observatory reported air strikes on Jobar and the outlying region of Eastern Ghuta, where rebels have their rear bases.

It said warplanes also bombed the opposition stronghold of Qusayr in central Syria, where nine rebels were killed defending the town against an army onslaught.

The insurgents are working to keep control of Qusayr and nearby Rastan after being largely driven from their position in Homs city, which suffered bombardments for the past half year and where more than 100 people died amid an army offensive in the last seven days.

Driven from large swathes of land in the north and east by rebels, the regime is focused on maintaining its grip on the key axis from Damascus to Homs, and on to the coastal Alawite heartland.

Troops have meanwhile been forced to relinquish vast stretches of territory in the north and the east.

On the humanitarian front, the UN agency for Palestinian refugees urged donors to remember more than half a million Palestinians caught up in the conflict when they meet in Kuwait on January 30.

Britain pledged a US$33 million aid package to help Syrian civilians, nearly half of which would be channelled through agencies in Jordan where a record 6,400 refugees arrived Thursday and Friday.

International Development Secretary Justine Greening, who announced the package, implored other nations to step up aid at the Kuwaiti donor conference to stem the fallout from the conflict.

“Warm words won’t provide the shelter and support that Syrian refugees need. Money will,” she said. “This is a man-made crisis. That man is Assad.”