Nasrallah: Christians have reason to be scared after what happened in Iraq, Nigeria, Syria 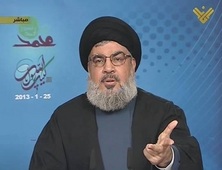 During a ceremony marking Prophet Mohammed’s birthday, Hezbollah chief Sayyed Hassan Nasrallah attacked the Campaigns against the Prophet calling them deliberate and suspicious.

“The Campaigns against Prophet Mohammed are deliberate and suspicious and aimed at abusing the great Apostle and his humanity and this is the most important challenge facing the Islamic nation, scientists and leaders today. We do not accept these abuses by some of the films, graphics and articles, it is our responsibility to finition our great prophet because the things attributed to him are falsel, slander and defamatory .”

Addressing the controversial issue of the electoral law Nasrallah said attributing the orthodox law to Hezbollah or Syria is an insult to all the Christians of Lebanon.

“We had reservations initially about the proposed Orthodox electoral law and we in fact initially rejected it but our allies convinced us later and we now accept it.” He added:

“We prefer the law that was adopted by the cabinet . We also prefer the one electoral district for the whole country and we have accepted the law based on 13 districts even though this may not be to our advantage and may turn us to a minority ”

He said Lebanon’s upcoming election remains a highly sensitive issue. All Lebanese parties and sects approach it with sensitivity due to the circumstances in the country and the severe divisions that exist. This holds true especially given what is happening in the region.

Addressing the concerns of the Christian community he said :

“When Christians here see what is happening to the Christians in Iraq, Nigeria and Syria, they have every reason to be scared”

Concerning calls for rejection of proportionality because Hezbollah’s posession of weapons, he said : “All Lebanese political parties possess weapons, ” adding “I think that an electoral law based on a majoritarian system combined with the presence of weapons would prove itself more dangerous.” This is in reference to the winner take all 1960 electoral law.

Commenting on the the results of the general elections which were held in Israel he said :

“There is no strong party in Israel, contrary to what Netanyahu had hoped for,” adding “the elections did not yield any new party to lead this entity.”

Nasrallah said that although the Israeli public had “serious trust issues” regarding Netanyahu, he was elected because there was “no other choice.” He said that all parties in Israel, both right and left, were “misleadingly the public.”

He added that the Israeli election results proved that “the only guarantee to Palestine is resistance.”