Lebanon has the largest number of Syrian refugees 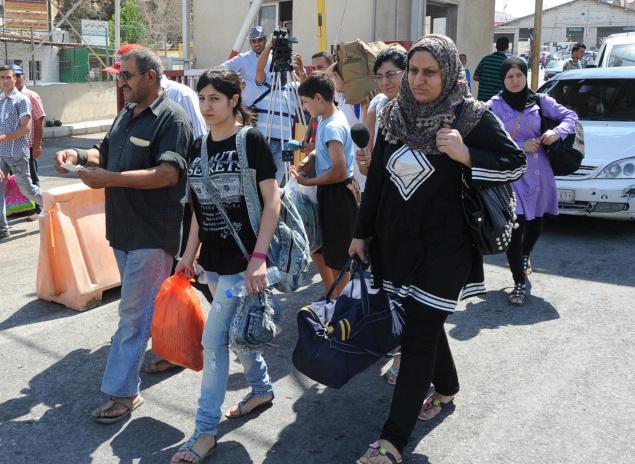 According to observers the actual number of Syrian refugees is more than double the figure reported by UNHCR , because many of the Syrian refugees are staying with their Lebanese relatives and never register with the UNHCR .

This is a summary of what was said by UNHCR spokesperson Adrian Edwards – to whom quoted text may be attributed – at the press briefing, on 22 January 2013, at the Palais des Nations in Geneva.

UNHCR is expanding registration and assistance for Syrian refugees to keep pace with the numbers crossing into neighbouring countries each day. Less than a month after the Syria Regional Response Plan for 2013 was launched, UNHCR and partners have begun the ambitious programmes of registration, outreach and financial assistance that were envisaged in the US$1.1 billion plan. So far, however, UNHCR has only received 18 per cent of the funding it needs. Unless further funds come quickly, thousands of vulnerable Syrians will not benefit from much needed assistance.

In Lebanon, UNHCR registers an average of 1,500 refugees daily through its four registration centres across the country, and is increasing capacity to respond to growing needs. We have established a new site in Bekaa, and will be opening a registration site in Tyre in the coming months. We have also identified land for expanded registration in Beirut. These efforts will reduce waiting periods that currently stand at an average of two months.

In addition, and as part of our contingency planning, we are working with the Lebanese authorities to identify two transit sites to accommodate refugees temporarily until appropriate accommodation can be found. The aim is to ensure that newly arrived refugees are safe and warm until other accommodation is identified.

Following the successful implementation of a pilot project in north Lebanon for 200 families, we intend expanding cash assistance to 18,000 beneficiaries by June. Families in need will receive an average grant of US$240 a month to contribute to their monthly rent and living costs. This grant will increase refugees’ ability to find accommodation, purchase needed clothes, kitchen, and other household items on the Lebanese market and therefore also contribute to the Lebanese economy.

An accelerated registration exercise begins today in Jordan, aiming to process up to 1,400 Syrian refugees a day in the Amman registration center. This number will increase further once the registration center in Irbid, in northern Jordan, becomes operational. Two teams are working between 7am and 9pm, 6 days a week, with a goal of clearing 50,000 appointments by the end of February.

Za’atri camp has experienced a massive increase in arrival numbers, with 8,821 Syrian refugees crossing the borders in the past 5 days. Refugees have arrived throughout the night and long into the day marking a significant change from earlier trends when the norm was for people to arrive at night. UNHCR estimates that 21,000 people in need of protection have crossed into Jordan since 1 January, with new arrivals reporting increasing desperation for safety.

In Jordan some 7,700 families (or 30,000 individuals) are now benefitting from cash support. This is 60 per cent more than in November. Due to a funding shortfall, UNHCR was unable to assist all 8,523 families identified for cash assistance for the month of January 2013.

With 80 per cent of Syrian refugees living in urban communities, cash assistance has been instrumental in allowing the most vulnerable households to cover their basic needs such as rental costs. Depending on their size, families receive between 50 and 120 Jordanian dinars (US$70 – 170) per month. In addition to this, and to help cope with the winter weather, families have received extra funds to help purchase fuel, winter clothes and additional blankets.

UNHCR has also strengthened its outreach to Syrian refugees, with close to 11,000 home visits carried out by dedicated field teams and our implementing partner, International Relief and Development (IRD) across all governorates in Jordan since April of last year. These visits have helped us reach the most vulnerable, including elderly refugees with medical needs and female-headed households.

UNHCR staff, NGOs and outreach workers have noticed a significant increase in the needs of urban refugees over the past couple of months, as the situation becomes more prolonged and as people struggle to support their families. Many refugees are living in poorly insulated rooftop shelters and basement studios. It is not unusual to find several families crammed into a small apartment. Many are surviving on the generosity of Jordanian neighbours, who have limited resources themselves.

The Government of Jordan estimates over 300,000 Syrians have entered the country in the past 22 months, of which 245,000 are accommodated in host communities. There is a notable impact on local infrastructure, in particular healthcare and education services.

Of the 73,150 Syrian refugees now registered in Iraq, more than half are living in refugee camps, with 35 per cent living in urban areas. UNHCR, together with the Government of Iraq, the Kurdish Regional Government, other UN agencies, and implementing partners, has responded to increased vulnerability during the winter by scaling up distribution of plastic sheeting, mattresses, kerosene, stoves, heaters, fleece blankets and quilts. Other initiatives include replacement of lightweight tents with more durable family tents.

UNHCR and partners continue to work on increasing attendance of Syrian refugee children at school. The cold weather has deterred some children from attending school. In Al Qaim UNHCR and UNICEF replaced tent schools with prefabricated classrooms while in Domiz UNHCR and private organizations are building schools to replace tent classrooms.

In Iraq, women and children make up approximately 52 per cent of the Syrian refugee population. Most Syrians arriving in northern Iraq are from Hassake (65 per cent), Damascus (15 per cent) and Aleppo (14per cent). In Al Qa’im the majority of refugees are from Deir Ez Zor and other towns near the Al Qa’im border point.

According to the Turkish Government, there are currently 156, 801 refugees hosted in 15 camps in seven provinces. This includes two container camps and 13 tented camps.

The Turkish government provides healthcare and education free of charge to Syrian refugees. Since the crisis began in March 2011, the government has logged over 606,000 visits to health clinics by Syrian refugees. There are 24,431 Syrian children receiving education, from pre-school to university level. In addition 5, 551 Syrian refugees are attending to vocational and language courses.

UNHCR has recently carried out an analysis of registration data for over 278,000 Syrian refugees registered in Jordan, Lebanon, Iraq and Egypt. The analysis reveals that over half of the population is children, 39 per cent under the age of eleven. One in five households is female headed. Close to 90 per cent of Syrian refugees arrived in 2012. One third of the refugees come from Homs, with the remaining originating from Aleppo, As Suweida, Damascus City, Dara, Deir-ez-zor, Hama, Hassakeh, Idleb, Lattakia, Quneitra, Raqqa, Rural Damascus and Tartous.

Region-wide, 664,081 Syrians are now either registered as refugees or being assisted pending registration.

LEBANON as of 18 January

Number of Syrians registered and pending registration with UNHCR: 215,112

JORDAN as of 20 January

Number of Syrians registered and pending registration with UNHCR: 197,815

TURKEY based on Government of Turkey figures dated 17 January

IRAQ as of 20 January

Number of Syrians registered with UNHCR: 74,876

EGYPT as of 20 January

Number of Syrians registered with UNHCR: 14,060

North Africa as of 15 January

Number of Syrians registered with UNHCR: 5,417