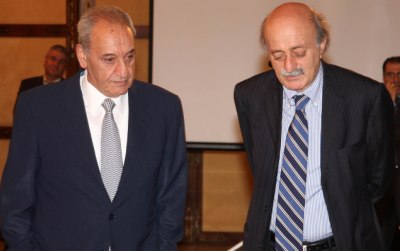 Following the call by Progressive Socialist Party leader MP Walid Jumblatt for establishing a Senate in Lebanon, Speaker Nabih Berri proposed on Tuesday holding the elections of for the members of the parliament and the senate at the same time .

“I suggest holding the parliamentary and senate elections simultaneously even though the Taef accord calls for electing the members of the senate after the election of the first non-sectarian parliament.” Berri said in remarks published on Tuesday in As Safir newspaper

He said he would “deal with it seriously” if all factions agree to such a proposal, although parliament would lose some of its authorities, adding ” I don’t have any reservations in that regard because I don’t own the parliament.”

He proposed electing the senate based on the Orthodox Gathering proposal which envisages a single district and allows each sect to vote for its own MPs under a system of proportional representation.

But he aslo proposed electing the parliament members based on proportional representation and a single district and overall equality between Muslims and Christians but said some sects may lose some of their representatives in the parlament.

Berri said all the electoral proposals are made in Lebanon . He added: “That’s why the Lebanese have a historic opportunity to prove their capabilities.”

Some political scientists believe that having a bicameral legislature makes meaningful political reforms more difficult to achieve and increases the risk of deadlock. This risk is greater in cases when both chambers have equal powers. Other political analysts argue strongly for the merits of the checks and balances that are provided by the bicameral model, which they believe helps prevent ill-considered legislation from being passed into law.